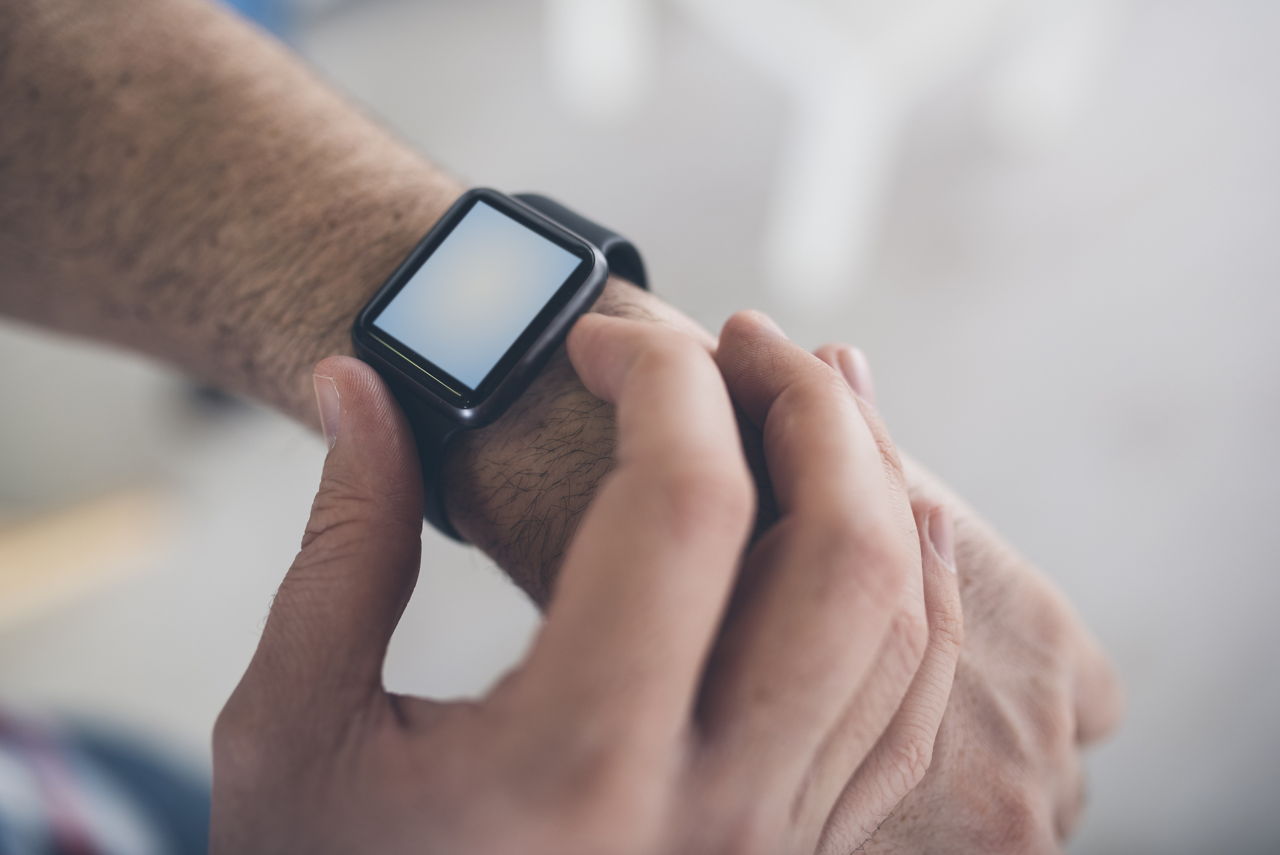 Pebble started off as a project on the popular crowdfunding site KickStarter.

The name Pebble is quite a misnomer. Probably the first true smartwatch, the humble Pebble created more than just a ripple in the pool of smartwatch wannabes. The watch, with its understated design language and simple interface, was an instant hit with the consumers. All big guns of the mobile industry have since hurried to release their own (not-so-)smartwatches in an attempt to cash in on this new lucrative market.

The world leader in mobile phones, Samsung, was the first to jump on board the smartwatch bandwagon, with the Galaxy Gear. Samsung’s smartwatch was as far apart from the Pebble, as a dog is from its tail! The Gear came out all guns blazing, with a spec sheet that could easily put a mid-range smartphone to shame. The Pebble, on the other hand, stuck to the basics and kept things rather simple. While people chose to ignore the antics of the Gear, they were just a little saddened by the geeky look of the Pebble.

Both companies have since returned to the drawing board, and have released their second generation of smartwatches. The Pebble Steel is more of a cosmetic upgrade to the original pebble, while the Gear 2 is a major overhaul. These are probably the best smartwatches in the market today. Without further ado then, here’s a look at how these two smartwatches compare against each other.

The watch has dimensions of 46 x 34 x 10.5 mm, and weighs about 56 g with the leather strap and 99 g with the metal strap on. The Pebble Steel has a very robust construction and sports a 5ATM waterproof body, so you can take your watch along for a swim if you wish to. The case is made of milled marine-grade stainless steel making it very durable and classy to look at. The right side features three buttons―Up, Down, and Select―while the left side has the back button. The left also houses the magnetic pins that connect to a USB cable for charging. Apart from the stainless steel and leather straps that come along with the Pebble, you can also use any standard 22 mm straps to go with it. The Pebble Steel is currently available in two color variants, Brushed Stainless Steel and Black Matte.

With dimensions of 36.9 x 58.4 x 10.0 mm, and weighing in at 68 g, the Gear 2 is almost the size of most regular watches. The watch retains the same brushed-metal frame which now houses the camera and Ir LED above the screen, and a hardware Home button below it. The back of the watch has a unique hear rate sensor, just above the pogo pins for charging. There’s also a dedicated mic for noise-cancellation on the Gear 2. You can now fit any standard 22 mm strap to go with the Gear 2. The watch is available in three color variants, Charcoal Black, Gold Brown, and Wild Orange. The Gear 2 now comes with an IP67 rating for being dust and water resistant.

The Gear 2 is no more the eyesore its predecessor was. It looks like a compact unit with the camera, Ir LED, and Home button all cramped into the small frame of the watch. The heart rate sensor is a real nice touch, and the water-resistant construction is very welcome. Our heart, however, is with the premium-looking Pebble Steel which looks extremely suave with the metal strap. If that weren’t good enough already, the waterproof body has us completely floored.

The Pebble Steel retains the same screen as that found on the original Pebble. The extremely energy-efficient e-paper display has a resolution of 144 x 168 pixels. The transflective LCD is protected by a layer of Corning Gorilla Glass. There’s also an anti-glare coating on top. The monochrome display is always on, and comes with a backlight. The Pebble Steel also has a tri-color LED light to show its charging status. The hardware buttons can be used to navigate through its screens.

The Gear 2 comes with the same Super AMOLED screen as that on the Galaxy Gear. The 1.63-inch screen has a resolution of 320 x 320 pixels and has a scratch-resistant surface. The display has good contrast levels, although its brightness leaves a lot to be desired. The Home button, along with swiping on the touchscreen, handles all the navigation of the Gear 2.

The Samsung Gear 2 has a beautiful display which definitely wows you. It, however, has a rather lack-luster performance in broad daylight, and when outdoors, you would need to shield it from the sun to be able to read anything on it. The Pebble Steel, on the other hand, has a monochrome display which might not have a lot of bling, but certainly shines in the sun thanks to its e-paper technology. It is pretty much even-stevens here, as the Gear 2 shines in the dark, while the Pebble Steel outshines it in the sun.

Pebble Steel has a huge dedicated-app base. It runs on a proprietary Pebble OS. The smartwatch is compatible with the two most-popular mobile OSs, Android and iOS. It communicates with a compatible smartphone over Bluetooth 4.0 LE. Once you install the Pebble app on your phone, you can look for software for the watch using it, and seamlessly transfer them on to the Pebble Steel. There are plenty of apps, watch faces, and games for the smartwatch on the Internet. These are expected to grow even more once the Pebble appstore goes live. Apart from this, the watch also pulls up notifications from the paired smartphone, and you can even preview messages on it.

Much like its predecessor, the Gear 2 is a feature-loaded device. The 2.0 MP camera on the smartwatch lets you capture Full HD images and even record 10-second HD (720p) video at a time. You can save this data on the 4 GB of storage on the smartwatch, or seamlessly transfer it onto a compatible Galaxy device (17 phones at launch) via Bluetooth 4.0 LE. The Samsung Gear 2 now comes with an Ir LED which lets you control various electronic devices at home. The biggest USP of the Gear 2 are its health-centric features. The smartwatch comes with a heart rate sensor and a pedometer which can track your pulse, monitor your sleeping pattern, and the calories you burn. The Tizen-based wearable platform is relatively new, but should see a lot of apps being developed for it as the company actively promotes 3rd-party app development. The Gear 2 can display notifications and messages, and also make and receive calls from the paired device. It also features a music player which can relay music via a Bluetooth headset or speaker. Samsung’s Siri-like personal assistant, S Voice can also be found on board the Gear 2.

The Pebble Steel has a major head start when it comes to software available for it. The apps for this smartwatch are fun and very intuitive. The biggest advantage of the Pebble is that it supports most Android (v4.0+) and iOS (v6.0+) devices. The Samsung Gear 2, with it humongous feature list, puts us in 007’s shoes. We wonder though, if the camera would really serve any good purpose (apart from pervert shots!) The Music Player, heart rate sensor, and the IR remote features, however, are extremely useful, and they make the Gear 2 a great multi-functional device.

Powering through the week.

The Pebble Steel is powered by a 140 mAh Li-Po battery. The large battery, along with the energy-efficient display easily ensure that the smartwatch sees you through 5-7 days of use on a single charge. The watch can be charged using a proprietary USB charging cable with a magnetic connector.

At the heart of the Gear 2 is a rather large 300 mAh Li-ion battery. The battery life of the watch takes a hit because of the rich display, which is battery guzzler, and the many other features on board. The Gear 2 makes it through about 2-3 days of moderate usage before you go looking for the charger. It can be charged using the proprietary charging case that comes along with the watch.

Barely any contest here, the Pebble Steel comes on top with a marathon battery that sees it through the week. The Samsung Gear 2 has to pay a heavy price for it endless list of features. Our advice to Gear 2 owners would be, keep the Samsung Gear 2 close, but the charger even closer!

The variants of the Pebble Steel.

The Pebble Steel is a simple, yet effective smartwatch that would make any owner proud. We absolutely love that it doesn’t try too hard to stand out from the crowd, and yet, grabs all the attention. It is more of an anti-hero and comes without too many bells and whistles. When it comes to sense and sensibility though, there’s no smartwatch quite like the elegant-looking Pebble Steel. If you are looking for a simple watch which does the basics right (and very well at that), then you might just have met your perfect companion in the Pebble Steel.

Jack of all trades.

We must admit that we were totally outraged by the hideous design of the original Galaxy Gear. It is great to see the company make amends and release a beautiful device which still packs all the features (gimmicks!) of its predecessors, and has even learned a few new tricks. For those who care, the camera has been bumped up to 2.0 MP from 1.9 MP on the Galaxy Gear. Also, now, the smartwatch is a lot more powerful with a 1.0 GHz dual-core processor handling the show. The real star of the show (and what really matters) though, is the health-centric approach of the device. This should really help sell the Gear 2 to fitness-conscious customers. The Ir LED too is a handy addition. The Tizen OS though, is uncharted territory for most, but should have a good developer base in time.

All in all, we really are torn between the simple functionality of the Pebble Steel and the Samsung Gear 2 which seems like a smartwatch right out of Bond’s kitty. The Gear 2 does almost everything right, but just loses out to the Pebble Steel with its killer looks and marathon battery. Also, the fact that it is compatible with most smartphones in the market irrespective of the make and a soaring developer base, tilts the balance ever so slightly in favor of the smartest of all the watches out there―the Pebble Steel. Here’s a simple analogy from the music industry, Pebble Steel is the Adele of the smartwatch arena, while the Gear 2 is Lady Gaga.

Whichever one of these incredible watches you choose, you are unlikely to regret it. We had earlier brought to you the showdown of the predecessors of these incredible devices, and how they set the ball rolling for these next-gen smartwatches. It is good to see smartwatches finally taking their name seriously and bringing in some gray matter of their own.