What You Need to Know about AMD Mantle

At the GPU 14, AMD and DICE introduced Radeon R9 series graphics cards that are powered by AMD's low-level application programming interface (API), Mantle. Read on to know more about this API that works with Graphics Core Next (GCN) architecture.

You are here: Home / IT Jobs / What You Need to Know about AMD Mantle

At the GPU 14, AMD and DICE introduced Radeon R9 series graphics cards that are powered by AMD’s low-level application programming interface (API), Mantle. Read on to know more about this API that works with Graphics Core Next (GCN) architecture.

No AMD for Microsoft!

Microsoft’s Windows App Builder Blog confirms that Xbox One and PlayStation 4 will not support AMD’s Mantle.

The Mantle is a low-level API that is aimed to replace the high-level alternatives, which have failed to use all CPU cores. It is similar, but not an alternative to DirectX or OpenGL, except for the absence of the overheads. At the summit, two slides were completely dedicated to Mantle where its capabilities were highlighted. We have summarized the details for you.

What Is AMD Mantle?

After graphic cards were launched, Ritche Corpus, Director of ISV Gaming and Alliances, AMD, posted a few insights of the API. Here’s what he mentioned as the ‘three essential ingredients’:

Let us now take a look at the global diagram. Here, the GCN architecture is the core, followed by Mantle Driver, then Mantle API, and finally the applications form the crust.

* Please note that the image is used for representational purpose only. 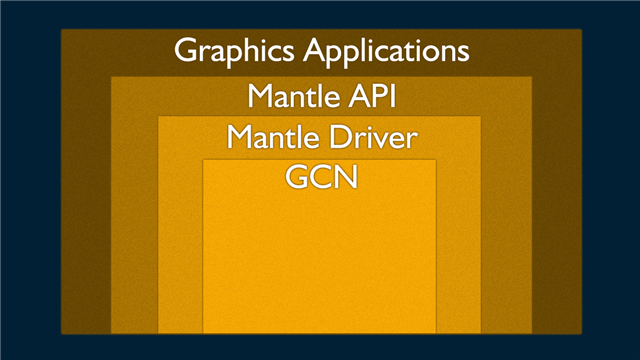 The driver will ensure that the end application talks directly to the GCN architecture, thus, maintaining the software-hardware ecosystem. Here, the Mantle is the software, while the GCN is the hardware. This ecosystem is the main differentiating point between consoles and PC games. While console gamers always write their applications closer to the hardware so that they attain the required speed, PC gamers cannot do the same because DirectX and OpenGL don’t show their hardware to developers! Here’s where Mantle comes in. It gives developers access to the multi-core hardware so that they can develop an application that is closer to the metal.

Each of the existing consoles have a different architecture. This means that as a developer, you need to modify the performances for each architecture. Also, the console architecture is quite different from that of the PC video cards. So, if a developer has developed an application for the console, he needs to make significant modifications to it, so as to make it PC-gaming compatible. But with Mantle, this problem will no longer be in picture. The GCN architecture gives a unified graphics architecture which can be used for both console and PC games. Mantle allows developers to write games that work on various platforms. On platforms where this language cannot be used, a part of this development can definitely be reused so that the redevelopment efforts will be minimized. Developers are now saved of the efforts of knowing inner-core details of different architectures, while developing games for them.

The best news for gamers is the increased performance that they will get with this API. The earlier approach of having a common language for increasing the compatibility was to have increased arbitration which has a negative effect on the gaming performance. Abstraction also hides all the features that hardware has to offer. With Mantle on board, you will be exposed to the best of both worlds. The hardware features will be fully available to the developers, thus, increasing the performance and also adding new features. This gives an enriched experience for gamers. Battlefield 4, to be released in December, is the first game that will have Mantle support. The game engine Frostbite 3 which has Mantle at the back end will ensure that all gamers have more Mantle-supported games.

This was all that we could gather from the initial talks on the API, but as AMD puts it in the AMD gaming blog, “there is still much to be said” about the language. Well, we will have to wait for the AMD Developer Summit (APU13) that will be hosted from November 11 to 13, to get more details on the API. As of now, it seems to be a good opportunity for the developers, who can use this platform to get access to all the hardware features and build games with alluring graphic experience.