What is MOM.exe Windows Process? Here’s Everything You Need to Know 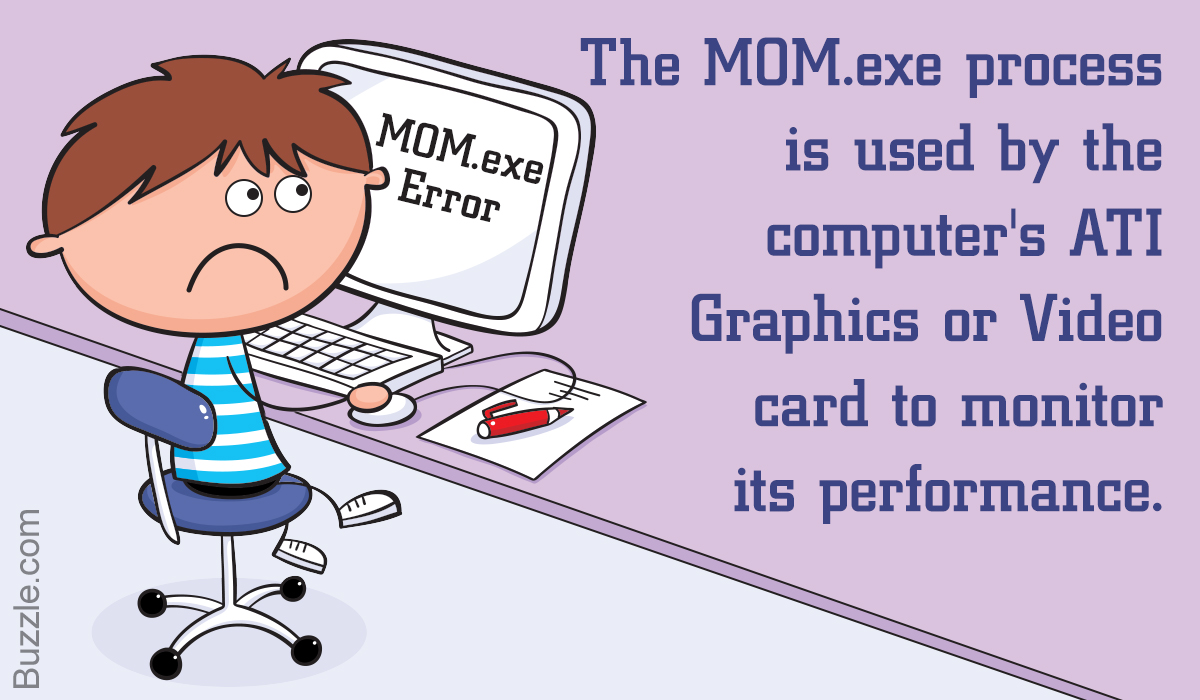 Thanks to its tendency to cough up errors, there is a lot of speculation regarding the MOM.exe Windows process, and a lot of people even think it is a virus. Being served with an ‘MOM.exe Error’ message, however, does not always indicate disaster. Techspirited throws some light on this mysterious file, and describes how one should deal with an MOM.exe error message.

Contrary to popular assumption, MOM.exe is not a virus. It is not even an indispensable system file that is required for the proper functioning of the Windows operating system running on your computer. In fact, it is an executable process related to the Catalyst Control Center utility program that manages the AMD (ATI) Graphics/Video Card of your computer.

Unfortunately for Windows users, majority of the operating system’s files and processes have names that sound so menacing that if any of them become corrupted or run into an error, the message sent to alert the user about the problem inspires his/her worst fears.

Although an MOM.exe error does not directly imply that your computer is infected by a virus, a common trick employed by malware is to disguise themselves as Windows processes so as to appear innocuous, and it is possible that the MOM.exe process or many other processes on your computer are in fact worms or other kinds of malicious software. That is why, even if your computer is completely clean, it is important to run a full-system virus scan on your PC or laptop at regular intervals.

We understand that although you may be feeling a little reassured after reading this, you are still stumped by a number of unanswered questions regarding MOM.exe, such as what its actual purpose on your computer is, under what circumstances do error messages that credit MOM.exe appear, how to get rid of them, and so on. In our mini guide that follows, we will set all your worries to rest.

Everything You Need to Know About MOM.exe

The Advanced Micro Devices (AMD) Graphics and/or Video Card, a product of the prominent hardware manufacturers (ATI Technologies), is a hardware add-on that is fitted on most PCs and laptops, and comes with a package of utility software that includes even its drivers. These programs are pre-installed on your computer by the manufacturer even before purchase.

The Catalyst Control Center, which users who frequently open the Windows Task Manager would recognize better as the ccc.exe process, is a sort of control interface that helps to manage ATI hardware and customize the way it functions. One of the many tasks taken care of by the Catalyst Control Center is that of monitoring the performance of the device. This is where MOM.exe comes in.

MOM.exe is quite a key component of ccc.exe. Along with the Microsoft .NET framework installed in your system, it helps the Catalyst Control Center perform its essential tasks like providing support for users to customize their display monitors, set different display profiles, and adjust video performance.

It should, therefore, not be uninstalled without a good reason. The only time you should ever consider getting rid of this file, unless of course it is a virus parading itself as MOM.exe, is in the event that you are replacing the ATI Graphics and Video Card in your computer with a different one, or else removing it entirely.

Reasons Behind the Occurrence of the Error

There are a number of reasons why the MOM.exe process could generate an error, interrupting the smooth functioning of your computer.

♦ Since MOM.exe and the Microsoft .NET Framework generally work as a team, a MOM.exe error may appear if the .NET Framework encounters a problem, or else if it needs to be updated to a newer version.

♦ Any error originating in the AMD (ATI) Catalyst Control Center, including a problem with the performance of the drivers, may result in an MOM.exe error.

♦ The MOM.exe process running on your computer could in fact be a form of malware, adware, spyware, or Trojan (read: virus). In this case, you need to work on getting rid of it immediately.

How to Determine if MOM.exe is a Virus

It is said that it can be determined whether a system file is a virus or not by checking how recently it was created, in comparison to other files. However, this is not applicable to MOM.exe in all cases.

Previously, the role of MOM.exe (monitoring data) was carried out by another system process called CLI.exe. However, this file was extremely corruptible and frequently generated fatal errors. Moreover, in spite of being an indispensable system file, it was often ‘hijacked’ by malware. Eventually Microsoft and ATI replaced it with MOM.exe, which, if genuine, is completely harmless, much unlike its predecessor.

If you are using a fairly old computer, it is possible that MOM.exe appears to be younger in age than other system files because it was recently installed along with a Windows update, and not because it is malicious.

The most important matter that you need to verify before you can conclude whether the MOM.exe Error is an issue that can be fixed, or a potentially harmful virus that needs to be completely wiped out, is whether or not you are using an ATI Graphics Card along with your computer in the first place. If your hardware is a product of a different manufacturer (for example, Nvidia), then neither of the two, i.e., ccc.exe or MOM.exe, need to be present on your computer.

Unless these programs are residual ones, from a time in the past when your computer used to have an ATI Graphics or Video card, there is a possibility that the MOM.exe file in question is a virus.

The path at which one can locate the bona fide MOM.exe file is:

If you encounter a MOM.exe file located elsewhere, you have reasons to believe that it is a virus that needs to be removed from your computer.

Most viruses cannot simply be directly deleted off your system. However, a powerful antivirus software should do the trick. Once you successfully free your computer of viruses, do not become complacent; continue the practice of scanning your entire computer for viruses regularly.

The steps involved in getting rid of the error caused by MOM.exe, once you are sure that the file is not a virus, are extremely simple.

Always consult a technician before you take any drastic steps, such as completely formatting your hard disk or reloading your operating system. Also, messing with Windows system files all by yourself is never a good idea; taking professional help will ensure that you do not accidentally delete or tweak something that is integral to your computer’s smooth functioning.

Keep a security/antivirus software in place that dynamically scans your computer, so as to prevent the entry of any virus disguised as a system file. Never restrict the feature that allows the Windows operating system as well as other installed components to update themselves, as discrepancies in versions may cause system errors.

We hope we were able to help you understand the MOM.exe Windows process better.