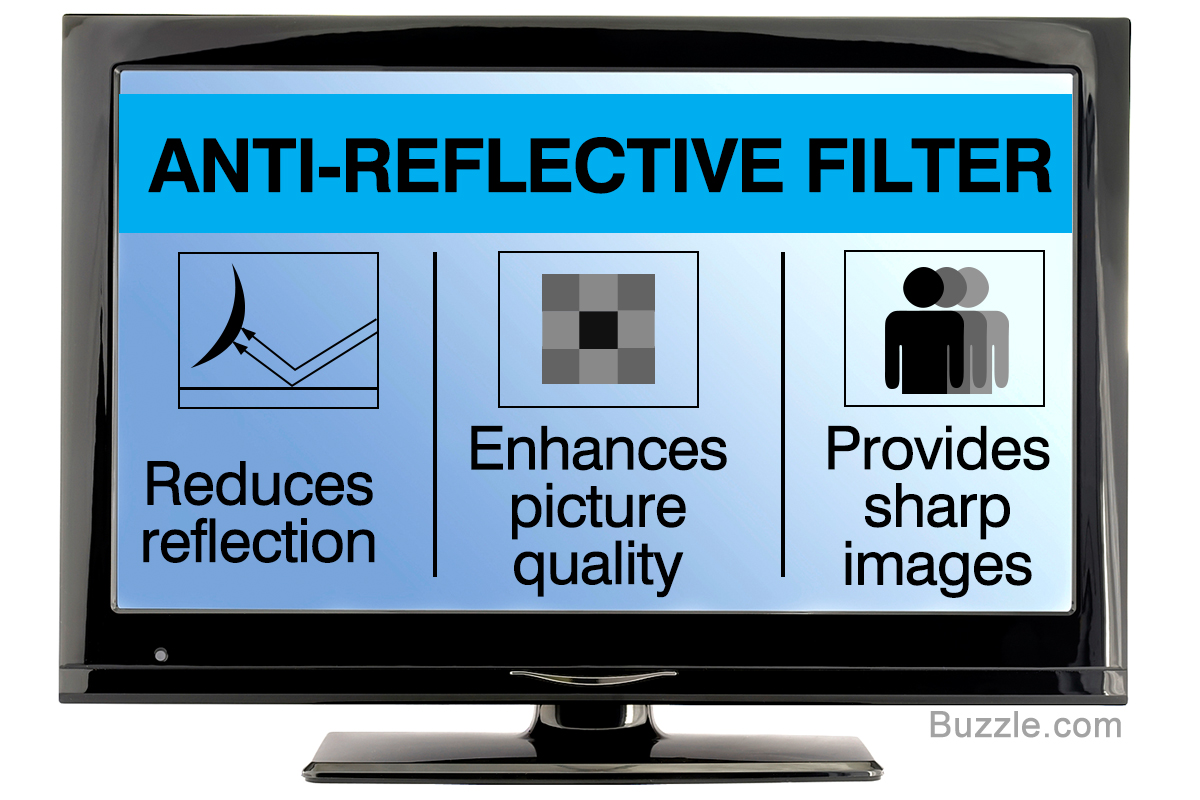 You’ve just bought a new plasma television, and are contemplating whether to invest a little more on an anti-glare filter? This post elucidates the features of an anti-reflective filter, and how it actually helps!

An anti-reflective or AR filter on a plasma television is nothing but an extra attachment, in the form of a thin film or screen, to the television screen, so as to improve one’s viewing experience.

This filter is not provided by the manufacturer, and the buyer has to buy it separately and bear the cost of applying it. What an anti-reflective filter does is, it blocks off ambient light falling on the screen of the television set.

While an LCD can have a matte or gloss finish to its screen, plasma televisions always need glass a panel as a screen. The downside being that, glass is a good reflector of light, and this proves troublesome while watching TV, especially if your TV has facing windows or light source.

An anti-reflective filter makes sure that the ambient light―artificial or natural―gets diffused and reduces the brightness of the reflection on the screen.

For example, Mr. Doe has two rooms in his house, and both rooms have a plasma television in them. One television set has an anti-reflective screen, and the other one does not.

So, whenever any light falls on the one devoid of the filter, the light spreads, causing the colors to look lighter, and makes it difficult to clearly see the characters, i.e., people, objects, etc., on the screen.

Mr. Doe has to literally shift his position from left to right, forward or backward, to get the perfect angle, so that he can watch TV without any hindrance. Now, Mr. Doe decides to watch his favorite show on his plasma set that has an AR filter. He’s sitting in the room watching his show, and his wife ends up drawing the curtains open.

There is always a debate on whether an anti-reflective filter is really required or not. The pros outweigh the cons, as it not only improves the quality of colors, contrast, luminosity, and angle of viewing, but it also lessens the stress on the eyes.

The only factor that most people find annoying is its price. Here are the two types of anti-reflective filters available in the market.

A removable filter is one that can be attached to the screen using hooks. These filters are made, keeping in mind the different sizes of television sets available in the market.

A coating filter is sprayed on, or in some cases it is a filament, or a thin film that is put on the screen of a plasma television. Usually, plasma televisions that are installed outdoors, like for weddings, or public events, are sprayed with at least 4 to 5 times, so that the bright sunlight does not hamper the viewing experience.

There is always confusion about glare and reflection. Glare is when one experiences difficulty in seeing due to the bright light that has been reflected off a glossy surface (light reflected of a car or a window pane).

Anti-glare is a feature that reduces the background reflection, but also causes the objects in the frame to appear defocused, and also ends up increasing the noise (disturbance). Anti-reflective filters, not only reduce reflection, but also provide sharp images, complete noise reduction, better picture quality, etc. How? It’s simple.

An anti-glare filters work only at surface level, i.e., once it is attached to the glass screen of the plasma TV, it tries to diffuse the light that hits the screen, and not adjust the light from the TV.

Glossy surfaces reflect more, hence, impairing visibility. Matte finish coatings are the best option to reduce glare and reflection. When cleaning your plasma TV that has either an anti-glare or reflective coat, always clean it with a dry micro-fiber cloth. Do not use an eraser to remove fine scratches, as it may damage your filter.