Though emails are easy way to communicate, they aren't necessarily secure and private, in most cases. A lot of email snooping takes place in this bits and bytes world, and it has become quite tough to select a secure email from a large host of service providers. Techspirited lists 5 of the best free and secure email services that protect one's privacy and keep conversations incognito.

You are here: Home / IT Jobs / 5 Secure Email Service Providers

Though emails are easy way to communicate, they aren’t necessarily secure and private, in most cases. A lot of email snooping takes place in this bits and bytes world, and it has become quite tough to select a secure email from a large host of service providers. Techspirited lists 5 of the best free and secure email services that protect one’s privacy and keep conversations incognito.

An email travels through several computers before reaching the recipient. A hacker would hack into any of these computers and read your personal emails; he/she could also manipulate the emails before they reach the desired recipient.

To select a comparatively secure email service, it is essential that you know the basics of the technical aspects in email communication. Knowing them would educate you regarding various security features that you should look out for when choosing an email service as per your security needs.

To begin with, you should know about the 3 main ‘delivery boys’, or in technical terms, ‘protocols’, that are responsible to deliver and receive your mail. The first delivery boy is called SMTP or Simple Mail Transfer Protocol. It is the most common and widely-used protocol for sending email messages between email servers. The second delivery boy does the job of receiving the mail and handing it over to you; this second protocol varies between POP3 or IMAP, expanded as Post Office Protocol and Instant Message Access Protocol, respectively. POP3 stores the recipient’s messages temporarily on the server until he/she accesses them. However, IMAP stores messages on the server permanently, and allows the user to access them from any compatible device at any point of time. 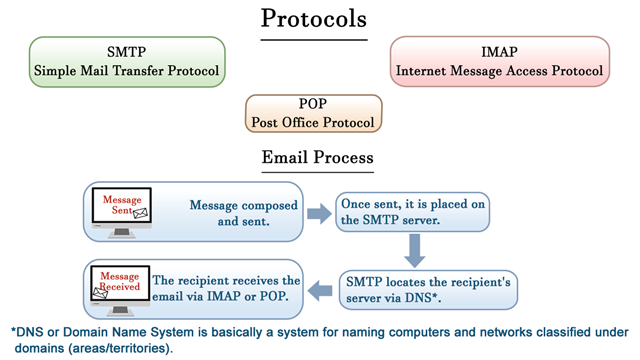 This infographic shows the steps involved in sending and receiving an email.

Email privacy and security could have some of the following loopholes, resulting in compromised confidentiality and anonymity.

The following email service providers have tried their best to cover most of these loopholes, and strive to provide a more secure email experience.

This email program is the creation of a Swiss-based service provider, and offers extreme privacy protection under the Swiss Federal Data Protection Act and Ordinance. Only a court order can compel the company to release the limited user-data it possesses.

ProtonMail provides the end-to-end mail encryption feature. Through this feature, the writer sends an encrypted message that can be only decrypted using a password, which the sender communicates to the recipient via phone or another medium.

The company’s server is unable to access any user data, and doesn’t store any kind of tracking information, like IP addresses, to protect the anonymity of the user. The users of ProtonMail can send encrypted messages to the users of non-ProtonMail service providers. There is also an option for self-destructing messages. Those message that are not accessed by the recipient within a certain time slot would automatically get deleted. Apart from this, all the data transmitted from the company’s server to the user’s browser is SSL certified.

Hushmail has been in the industry since 1999, and has been providing a solution for individuals and entities looking forward to make their communications on the Internet confidential and anonymous. It provides strong encryption features, superior spam and virus filters, and also has a mobile-friendly interface.

The limited 25 MB inbox space and the limited 20 MB attachment size for free users proves to be a big con. However, the paid versions do offer better storage and attachment options. Unlike ProtonMail, there isn’t any feature for self-destructing sent messages.

Though it has some cons, it doesn’t compromise on users’ privacy, and provides top-notch security in its segment.

Sendinc has been operating in the email-encryption segment since 2005, and is constantly chasing the aim to make email security applications extremely powerful, but also simple and easy to use. It has served millions of individuals, and developed security solutions for several organizations, including some of the Fortune 500 companies.

It does provide military-grade encryption techniques, along with 100 MB inbox storage, and also has developed mobile applications for iOS and Android, keeping easy accessibility in mind. The free version is really great for individuals, as it provides all the necessary features from the security and usability perspective. However, if you wish to use Sendinc for enterprise purposes, it’s advised to buy a corporate license, which costs $25 per month, and can be accessed by a maximum of 5 users.

This one is Based in Iceland, a country that has a good track record of safeguarding privacy, Unseen has been providing web-based services since its inception in 1995. Its concern towards privacy and security in web-based communication has motivated it to provide ‘A’-grade email and messaging services to its users.

Free users get an initial 100 MB inbox storage, which could be upgraded later by paying $50 per year. Apart from simple email, Unseen provides worldwide calling and messaging services, and also allows file transfers with attachments of up to 50 MB. It also provides a lifetime subscription, which is a really unique feature as compared to its competitors. A user can purchase this subscription by making a payment of $79, and avail all the premium services permanently, without any recurring payments.

This is not very much of a subscribed email service, as one can directly send an encrypted email just by visiting the website. No sign-up or login hassles are involved. Just go to Mobrien; fill the recipient’s email address, your name, your email address, subject, and message text.

Once you do this, you just have to click twice―first to encrypt and second to send―and lo! Your message has already been received by the intended recipient, who also automatically receives the passphrase to decrypt the encrypted text. The website is pretty secure, as it offers an open-cryptographic encryption, and the message sent remains encrypted until it is received. The only limitations it poses are; firstly, a user cannot attach files, the service is only limited to text emails; and secondly, there is no facility to receive an email, hence, no inbox or storage feature is available. One can only send encrypted emails using this service.

You could also check the encryption beforehand by using the website’s encryption and decryption tool. Go ahead and try sending an encrypted message.

Now that we have told you about some really reliable email service providers, you don’t need to think twice before sending a ‘top-secret’ email to your friends, family, or clients.

(Note: Although these email services are highly secure, they aren’t 100% hack proof.)