How to Build a Null Modem Cable

Null modem cable is used to directly connect two systems, and establish an Internet connection between the computers. Read on to learn how to build a null modem cable.

You are here: Home / IT Jobs / How to Build a Null Modem Cable

Null modem cable is used to directly connect two systems, and establish an Internet connection between the computers. Read on to learn how to build a null modem cable.

A null modem cable (RS-232 serial cable) is used when one needs to connect a DTE (Data Terminal Equipment) to another via their communication ports. When such a cable is employed, to establish a connection between two DTEs, both the DTEs are made to believe that, they are connected through modems. Hence the name.

Two DTEs (computers) can be interconnected with this specially designed cable without the use of DCEs (Data Circuit-terminating Equipment) i.e modem. A DTE is a device, which communicates with DCE, and provides data communication control functions, which is to be executed according to the link protocols, by converting the user information to signals.

Our Computer (PC), is a DTE. DCE is a device that sits between two DTEs, and communicates with it using the standards which is primarily RS-232.

Now, in our experiment we are not going to use any DCE to make the connection between the DTEs, we would be using a RS-232 serial cable. This communication method is temporarily used to make a connection between a laptop computer and a desktop device. It is mainly used in simple data-transfer network connections.

A serial data communication is directly made between two computers using the RS-232 serial cable. The basic applications of this cable are:

The hardware flow control between the two DTEs is done using RS-232 pin connections. First you need to identify, which type of RS-232 connector, your PC has. It could be 9-pin ports or 25 pin ports. One of the significant signals used in the connection is TD (Transmit Data) and RD (Receive Data). 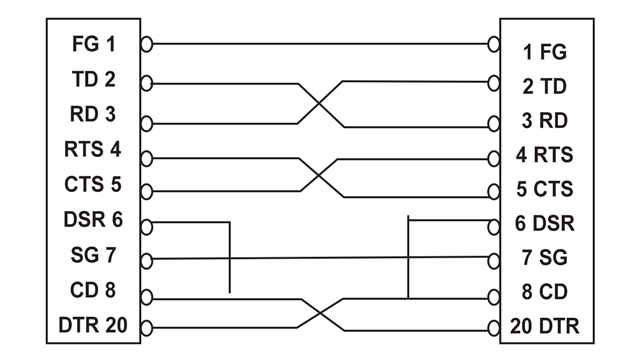 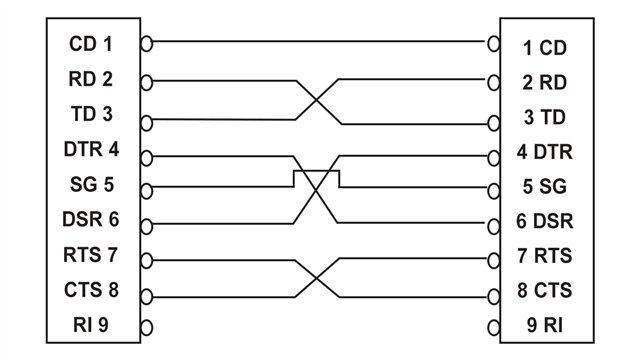 TD is used by one system to indicate that it is going to transmit some data, and RD is the signal which is sent by the other system, after it receives the data. Ring Indicate (RI) port is not used in this cable.

Embedded Signals and Its Function

The signals are sent from one DTE to another, in order to establish a serial communication. Take a look at the direction of the signal mentioned as from DTE and to DTE, considering only one DTE.

Not all the pins that are present on the RS-232 connector are utilized to make the null modem cable. Once the port connections are made using this cable, the connection parameters should be set between the two computers.

If your computer is running with Windows operating system, you need a Hyperterminal program to establish serial communication between the two devices. This program first needs to be installed in order for you to run it, after which it can be set in the following way:

In your computer, go to Start → Accessories → Communications → Hyperterminal. Double click on HYPERTRM.EXE, and enter a new name for the connection and click OK. A dialog box will appear, on which you need to select COM1 or COM2 and click OK. With the advent of Ethernet, this communication method is not used that often.