Seems Unthinkable Today, But What if There Was No Google?

Wish to prepare a dish but don't know its recipe? Google it! The answers to all our questions, relevant or irrelevant, comes from Google. However, what if this amazing search engine was never launched or just chose to disappear some day? Let's find out.

You are here: Home / IT Jobs / Seems Unthinkable Today, But What if There Was No Google? 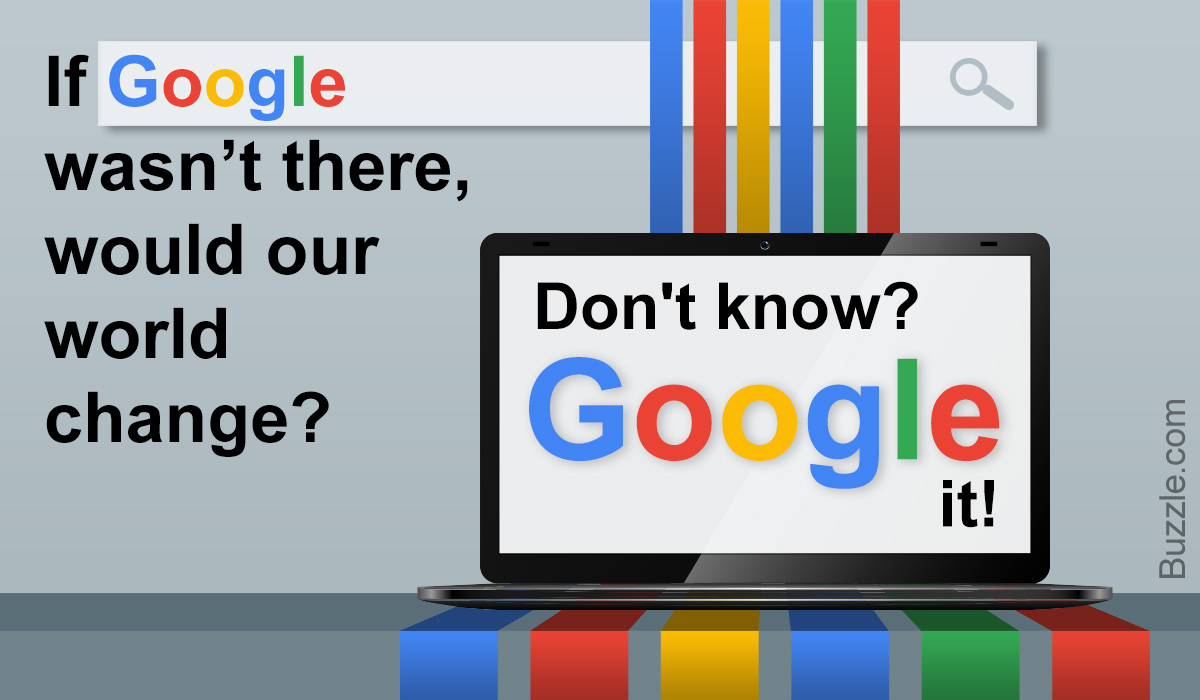 Wish to prepare a dish but don’t know its recipe? Google it! The answers to all our questions, relevant or irrelevant, comes from Google. However, what if this amazing search engine was never launched or just chose to disappear some day? Let’s find out.

“Don’t be evil” – that is Google’s unofficial slogan!

Google Inc. was founded in 1998 by Larry Page and Sergey Brin. The company’s headquarters are at Googleplex, California, United States. The company’s IPO was in 2004 with the mission statement “to organize the world’s information and make it universally accessible and useful.” Google heads the charts defeating all other search engines. In January 2013, the company declared that it had earned $50 billion in 2012! The number of visitors to Google was about one billion in May 2011. With so many people visiting the search engine, life without it is simply unimaginable. But, would our world be a better place if not for this website? Find out what this Techspirited write-up has to say about the impact of Google on our society if it chooses to cease one day.

Stuff We Would Miss

There are a host of services that Google offers, which makes life easy for us. If Google would disappear one day, our life would come to a standstill sans all these services.

Without Google, what would happen to your Gmail accounts? The next time you send an email, you would have to go to your Yahoo! id or other email accounts, except Gmail. You will not have loads of MB as storage space to store all those mails. Apart from that, there will be no chatting facility, no address book, and no linking with Google+.

All the documents that we share online wouldn’t be possible without Google Docs. If there were no Google Docs, you would need a huge storage space in your computer to keep all these files. And if you thought of sharing it with someone, you would have to use other email services. No Gmail, remember?

Everyone will vouch for how helpful Google Maps have been. What would be the situation without this tool? Well, the next time you get lost while traveling or want the shortest route to the nearby shopping mall, you would need to ask your friend, or some trustworthy person! Else, you would need to buy those physical maps that give details about the city’s important locations. However, to know the route to a cinema theater or restaurant, you would still need to ask someone or keep wandering till you find it!

Without Google Calendar, you would need to set reminders on your cell phones or mark dates on the physical calendar. Also, you wouldn’t be able to share your calendar with friends and family, so they would not know that you are busy on a particular weekend! You would also not be able to receive any email notifications about the upcoming events.

If there’s no Blogger, how would you share your thoughts and experiences with the world? Your only friend that would help you to speak your mind would be that old faithful diary! But, personal diaries cannot be read by everyone. Without Blogger, the world wouldn’t know how good a writer you are.

Without this service, we would have to pay for software, like Picasa. You wouldn’t be able access your friends’ photos or comment on it, except if they were shared on a social networking website. Also, the pictures included in your blogs wouldn’t be viewed, thus reducing traffic to your page.

You cannot get all the latest news in one go without this service. Instead, you would need to go to a popular newspaper’s website to check the news. Also, you wouldn’t get personalized news related to your topic of interest.

Lots of people would not even have the contact numbers of their “gchat” friends. So, the next time you are in the chat room, ensure you keep a log of your friends’ contact numbers. Who knows if Google goes off one day? Also, there will be no voice calls either to chat with your friends whilst working!

Now, if there is no Google, there is no Chrome either! That means we are left with Internet Explorer, or Mozilla Firefox! I am not saying that the other two browsers are not good, but the simplicity of Chrome cannot be matched.

If there’s no Google Translate, you cannot read what your French colleague has written in an email and you may miss out on some genuine information. I guess the sales of translation books may go up due to this service going off!

Internet Marketing – Does it Exist?

Imagine a small trader having some unique goods that would earn him huge profits. His platform to reach out to the people is via the Internet. The absence of Google would mean that he is left with Yahoo! and Bing for promoting his business. Due to the lack of a proper platform, his business would be affected for sure!

This is not the scenario with just one trader; many big companies also depend on Internet marketing for grabbing customer attention. The entire marketing scenario would change due to the non-existence of Google. Today, companies give as much importance to their SEO team as to their R&D team. The ranking on the Google page determines the traffic that the particular website receives. And if you are ranking on the first page of Google, you are in for a lot of money due to the immense traffic.

No AdSense means that your product is not being marketed due to the non-generation of the ads. Due to Google AdSense, your product, company, or website’s ads are viewed by people, and thus, you earn money. Without AdSense, the “pay per click revenue” earning category would become completely unavailable, and the company would suffer huge revenue losses due to this.

This will be shocker to most of us. Imagine a day without those cute “funny cat” videos on YouTube. You will not be able to view videos shared by people around the world. Also, if you have missed an episode of your favorite show, it means you have missed it forever! There is no second viewing of the episode on YouTube. You will not get updates about the latest videos or comments. You would not be able to show your friends how good you are at making videos now that you don’t have any evidence of your work online!

The entire idea of a world without Google seems scary, isn’t it? Who will answer all those silly questions that we keep asking Google? There are other similar Google-like services, but we simply want the best, which is Google. So, when will Google stop working? Let’s Google it! 😉