Phases of the Waterfall Model Explicated With a Diagram

You are here: Home / IT Jobs / Phases of the Waterfall Model Explicated With a Diagram 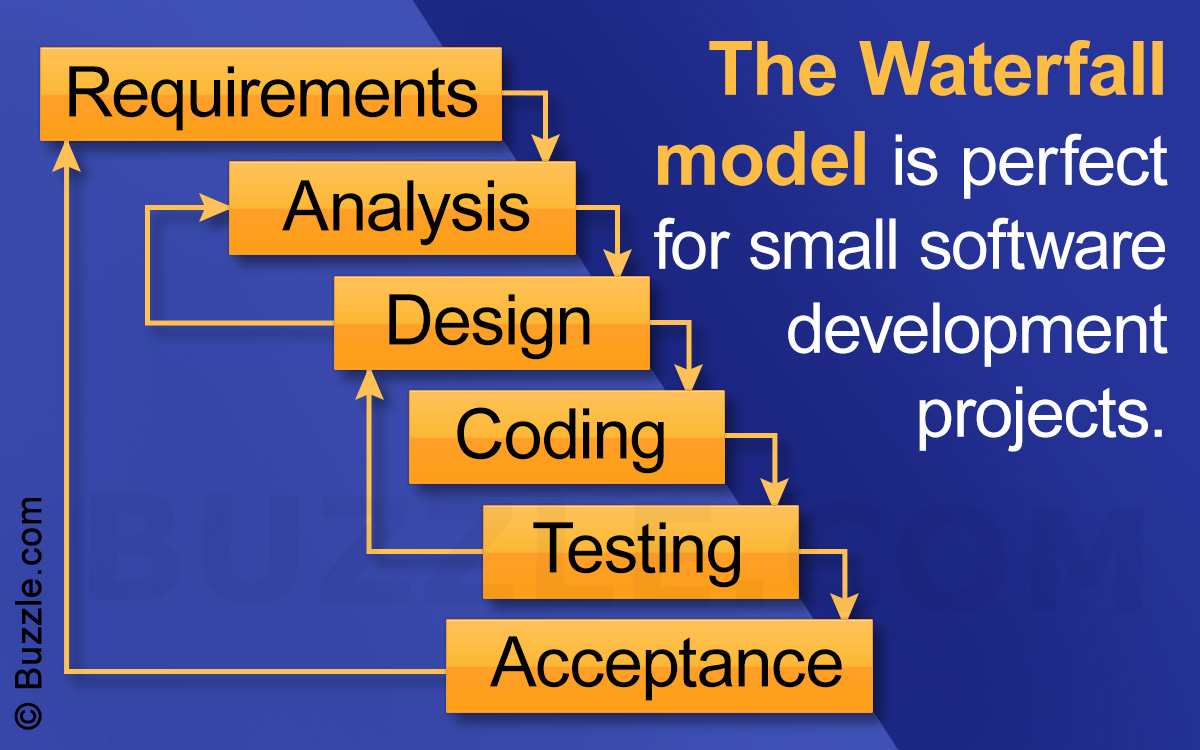 Well-designed objects have blueprints or plans. Once the design or structure is planned out, its creation is a simpler and more effective process. The same lies with programming. Programs can have algorithms or flowcharts, which plan out the steps and functions, that need to be performed. But large-scale software and computer applications require a base programming paradigm or model. In the software development process cycle, programming models are used to plan the various stages of developing an application. One such model is the waterfall model.

Explanation of the Waterfall Model

Let us now take a look at the different phases of the waterfall model. One important aspect that is worth mentioning, is that this model is designed such that until the preceding phase is complete, you cannot move on to the next phase of development. Progress flows in a downward fashion, similar to the way rushing water, from a height, flows downwards, hence the name “waterfall” was conferred onto this programming model.

The first phase involves understanding what you need to design and what is its function, purpose etc. Unless you know what you want to design, you cannot proceed with the project. Even a small code such as adding two integer numbers, needs to be written with the output in mind. Here, in this stage, the requirements which the software is going to satisfy are listed and detailed. These requirements are then presented to the team of programmers. If this phase is completed successfully, it ensures a smooth working of the remaining phases, as the programmer is not burdened to make changes at later stages because of changes in requirements.

As per the requirements, the software and hardware needed for the proper completion of the project is analyzed in this phase. Right from deciding which computer language should be used for designing the software, to the database system that can be used for the smooth functioning of the software, such features are decided at this stage.

The algorithm or flowchart of the program or the software code to be written in the next stage, is created now. It is a very important stage, which relies on the previous two stages for its proper implementation. The proper design at this stage, ensures a execution in the next stage. If during the design phase, it is noticed that there are some more requirements for designing the code, the analysis phase is revisited and the design phase is carried out according to the new set of resources.

Based on the algorithm or flowchart designed, the actual coding of the software is carried out. This is the stage where the idea and flowchart of the application is physically created or materialized. A proper execution of the previous stages ensures a smooth and easier implementation of this stage.

With the coding of the application complete, the testing of the written code now comes into scene. Testing checks if there are any flaws in the designed software and if the software has been designed as per the listed specifications. A proper execution of this stage ensures that the client interested in the created software, will be satisfied with the finished product. If there are any flaws, the software development process must step back to the design phase. In the design phase, changes are implemented and then the succeeding stages of coding and testing are again carried out.

This is the last stage of the software development in the waterfall model. A proper execution of all the preceding stages ensures an application as per the provided requirements and most importantly, it ensures a satisfied client. However, at this stage, you may need to provide the client with some support regarding the software you have developed. If the client demands further enhancements to be made to the existing software, then the development process must begin anew, right from the first phase, i.e., requirements.

The waterfall model continues to remain one of the most commonly used methodologies. No doubt, new models have been used, but the widespread use of this model is the reason why it is studied in various software management subjects. With the above diagram in hand, you will not have much difficulty in understanding the process of software development. This is not only one of the simplest software process models for application development, but it is also known for its ease of implementation in the field of software development.