Packet-switched Vs. Circuit-switched Networks: A Comparison You Wanted

Circuit-switched and packet-switched networks are types of telecommunication networks. Techspirited explains and compares these two types of networks.

You are here: Home / IT Jobs / Packet-switched Vs. Circuit-switched Networks: A Comparison You Wanted 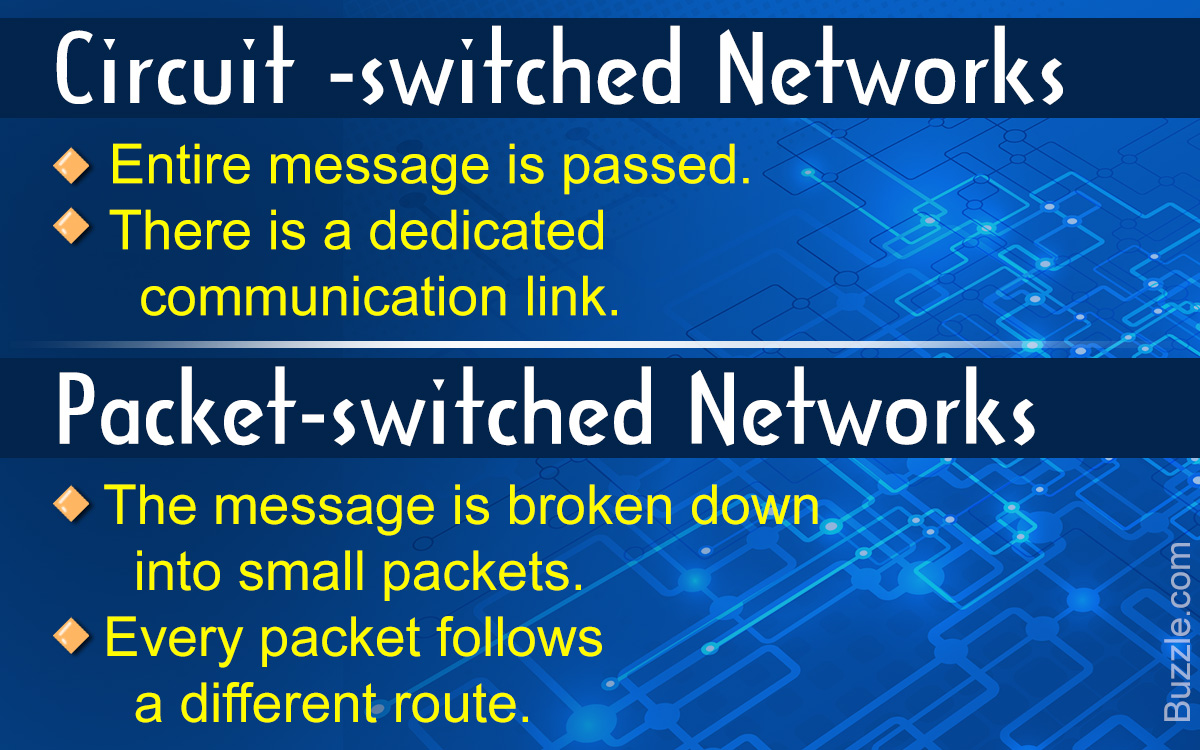 Circuit-switched and packet-switched networks are types of telecommunication networks. Techspirited explains and compares these two types of networks.

Here, communication between two nodes happens by establishing a dedicated communication route between them. This route of communication is established through a sequence of links within the network. These links start from the source and travel from one node to another and end at the destination. So, how does communication by circuit switching happen?

✦ Step 1: To communicate a message from one point to another, the first thing that we need to do is to connect them. This is done by logically establishing a circuit between the two points. In this circuit, some components are dedicated while some are shared.

✦ Step 2: Now we have to actually send the message across from one point to another. Mostly, a full-duplex connection is established for this. In the circuit-switching technique, we send either an analog or digital signal depending on the nature of the network.

✦ Step 3: Once the message has been sent, we have to terminate the connection. This is done by sending signals to free the resources.

Within the mesh of the network, we figure out a way to connect the source and destination, and then physically connect them through interlinking nodes.

Here, data to be transferred is broken down into small subsets known as packets. But there is no fixed path (or circuit) between the source and the destination through which the entire message is communicated. Instead, every packet of the message follows a different route to reach the final destination. Each packet has a header that contains the necessary routing information. Only one dedicated connection between the source and the destination is not set up. This approach has the advantage that during the instant when there is no communication happening between one pair of sender and receiver, the line can be used by another pair. At the receiving end, these packets are then rearranged in their proper sequence (this information is contained in the headers) and the entire message is constructed. There are two basic ways of packet switching:

During the initial setup phase, every intermediate node is given the information about the route of the packets in the form of a table. The packets that pass through these intermediate nodes have short headers that store the information about the next node, and not the final destination. Common examples of Virtual Circuit Networks include X.25 and Frame Relay that are used in public data networks (PDN).

Protocols such as Routing Information Protocol (RIP) and Open Shortest Path First (OSPF) are put to use while determining the shortest possible path. Hence, it is a dynamic, decide-on-the-go technique of passing packets. However, in this technique, since every packet follows a different route to reach the ultimate address, it may happen that they arrive there in a different order. The packets then have to be sorted to put together the entire message.