If you are ready to be unplugged, check out these top routers, which can make the transition easy. 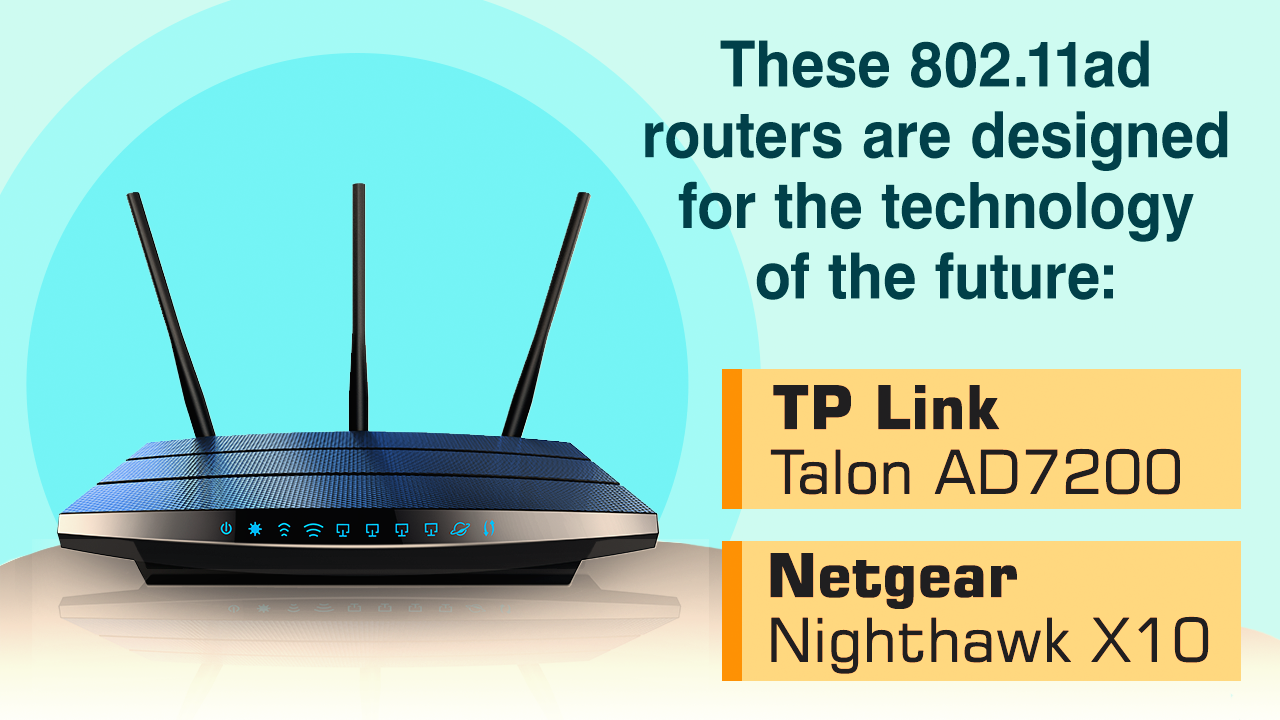 If you are ready to be unplugged, check out these top routers, which can make the transition easy.

What are Wireless Routers?

Routers grant you independence from the wired world and open up an unplugged internet experience. Once you have decided about setting up a wireless network, the first item on your shopping list is the router. The choice of router is crucial, as it will decide the maximum data transmission speed of your network and several other features.

Considering that the entire wireless networking setup is built around the router, you should go for the latest and fastest one available in the market.

To choose the best router, you need to know what are the current cutting-edge features to look out for. So here’s a buying guide in a nutshell.

The primary feature to look out for, in any wireless router, is the networking standard it’s based upon. Go for any 802.11ac or 802.11ac/ad based wireless routers, as currently, they offer the highest transmission speed. 802.11a, 802.11b, 802.11g and 802.11n based routers are now outdated, as they offer comparatively lower transmission speeds. Secondly, it’s recommended that you go for dual band routers, which can transmit data on three or at least two frequencies (2.4 GHz, 5 GHz and 60 GHz), which further speeds up network data traffic.

Check out if the router allows for network sharing of resources and provides for high-speed Ethernet ports. More the number of antennas, higher is the power output of the router and faster is its reception and transmission. So look for routers with higher number of antennas. The architecture of the place where you are going to use your router will have an effect on the range and performance of the router. The location where you are using your devices connected to the router will also affect the internet connectivity. The other electronic devices around the router will also affect the overall performance of your router.

Before buying a router, you should analyze the kind of network that you have, the number of devices that are going to be up and running on the network and the type of usage, primarily. The kind of router that will suit you the best will also depend greatly on other networking devices present, such as the range extender and access point. Try choosing a router that provides a good range in order to avoid having too many devices on your network.

There are many strong players in the wireless networking arena, that have launched new routers for 2018. Here are the best of the whole lot.

The Airport Extreme Base Station is an elegant looking device, designed with poise, by Apple. Apple is well known for laying emphasis on both looks and performance and this device is no different. There is a myth that Apple devices are complicated to use, which is not true with this router. It is extremely easy to set up and operate. What’s more? It supports wireless printer and hard drive sharing. The device is extremely speedy and provides a stable Wifi signal.

Apple has something new and exciting with every device that they launch and this device comes with a smart antenna. This smart antenna emits signals only in the direction of the devices using your WiFi, unlike other routers which emit signals in all the directions. The device is tall, slim, has antennas at the top and this design has not just been structured to make it look classy, but it also helps in providing a great signal strength.

The data rate of up to 1.3 Gbps can be achieved using this device. The channel bandwidth is 80 MHz and has simultaneous dual bands. So devices using 2.5 GHz and 5GHz frequencies can connect to the device simultaneously and with equal efficiency.

Linksys is a leader in the world of networking devices and has a wide range of the finest routers available in the market and Linksys EA9300 is just one of them. This device is one of the finest WiFi routers, using tri-band technology for an extremely efficient functionality. Tri-band technology ensures that all devices connected to the internet get an equal amount of lightning speeds. You will fall in love with this device if you are a gaming wizard.

The router has three frequency bands, band 1 of 2.5 GHz and bands 2 and 3, each of 5GHz. Band 1 works at a speed of 750 MBPS and is for the older N and G devices on the network. Bands 2 and 3 have speeds up to 1.5 Gbps. Bands 2 and 3 can together take care of file transfer, 4K TV, HD streaming, gaming and video conferencing. The router also has a 1.8 GHz quad-core processor, and two USB 3.0 ports.

When it is coupled with the Amazon Echo, you can control your network using simple voice commands. You can set up the device that needs the highest internet speeds and call it a priority device. Isn’t that cool? It has a good coverage area and is the most suitable if you have a big space. You can get rid of all the range extenders in there.

D-Link has been the toughest competitor for most companies to beat, in the field of networking technology. The primary reasons behind this being unmatched quality that they provide and the pricing strategy that they follow. The AC 3200 is one among the several greatest creations by D-Link. Loaded with six antennas mounted on on a red or black colored body, this device looks like a powerful beast and considering the exciting features, it doesn’t disappoint you at all.

It looks mighty and rugged and is the best suitable for heavy internet users. It has six external antennas to provide an unbeatable range. The device has a superb level of security and consists of a dual active firewall. The network can be accessed and managed using a simple mobile app. AC3200 is a Tri-Band Router. It is the first high performance router for home networking, which turbo charges your wireless devices. This router offers only four LAN ports as opposed to most other routers that come with eight LAN ports.

Netgear is among the most popular names in the networking industry and has a record of producing excellent networking devices. The Nighthawk X10 is no different when it comes to sophistication and performance. The device looks mighty, yet decent and comes geared with four antennas. The Nighthawk X10 is a device of the future and consists of many features which are not supported by devices of the present generation. However, it is still very easy to set up.

This state of the art device operates on three frequency bands which are 2.4 GHz, 5 GHz and 60 GHz. The problem with the 60 GHz frequency band is, signals that fall into this band cannot penetrate through walls and has hence has limitations based on the structure of the place where it is being used. The 160MHz WiFi technology provides speeds twice as fast as the original speeds, to mobile devices. Band 1 provides speeds of 800 Mbps and bands 2 and 3 provide speeds up to of 1700 Mbps and 4000 Mbps respectively.

It is a delight for gaming and 4k video streaming. It supports Amazon drive backup and understands Alexa commands.

This monster device is remarkably huge and comes equipped with 8 antennas to provide maximum range and maximum performance. Presently, there is a cut-throat competition going on between Netgear Nighthawk X10 and TP Link Talon Ad7200. The TP Talon AD7200 is certainly more of a future proof device coming with a comparatively affordable price tag. Hence, we would say that it is simply the best router presently. But it is to be noted that it is still considerably expensive.

The technical specifications are mostly the same as those of the Netgear Nighthawk X10, that are mentioned above. The device provides no coverage beyond the line of vision of the device, when it is operating in the 60 GHz band. There is just one app with which you can set up, update and manage the router. This is first router that was launched in the 802.11ad series of routers.

Each of the routers presented above offer the highest data transmission speed at present. All of them have the latest security features and most of the other facilities, that are needed for a home wireless networking system. Choose the best one, which suits your network requirements and overall budget. Have a great unplugged Internet experience.