AAC Vs. MP3: Which One Has Better Sound Quality?

AAC and MP3 are two of the most commonly found music/audio formats used today. But which one of them is the better audio compression format? Read this Techspirited article to find out.

You are here: Home / IT Jobs / AAC Vs. MP3: Which One Has Better Sound Quality? 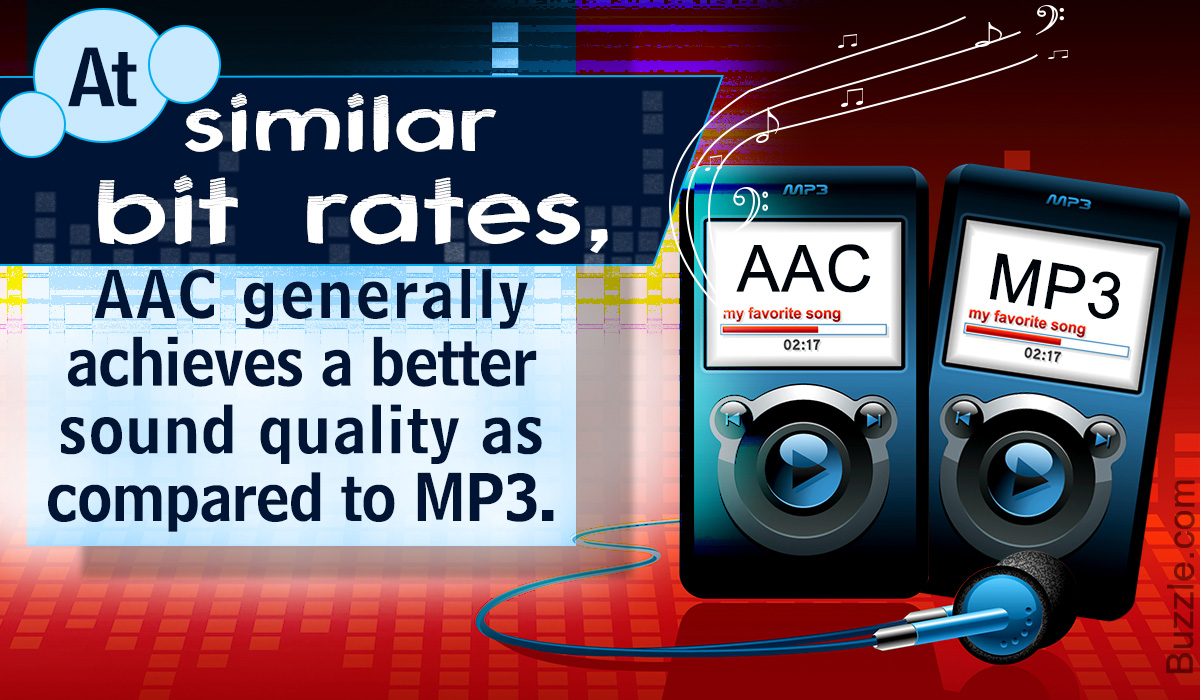 AAC and MP3 are two of the most commonly found music/audio formats used today. But which one of them is the better audio compression format? Read this Techspirited article to find out.

Did You Know?
AAC and MP3 fall under the category of ‘lossy’ audio formats, as in both of them, certain amount of original audio data is lost during compression. However, at high enough bit-rates, they are both nearly indistinguishable from the original source and compared to the loss-less formats, and take up only a tiny amount of space on music players.

In order to obtain a thing, something of equal value must be lost. So while we have managed to obtain the ability of packaging thousands and thousands of songs into our miniature music players, we have had to sacrifice at least some amount of audio quality, owing to the compression methods that are used to achieve the size reduction of these audio files.

However, it isn’t as bad as it sounds. There are many good compression techniques out there, that are able to sufficiently reduce the size of an audio file, while at the same time maintain optimum levels of audio quality. AAC and MP3 are two such audio compression formats, though being lossy, have over the years gained a lot of popularity.

In the following lines, we shall examine both these compression techniques, and run an AAC vs. MP3 comparison test.

What are MP3 and AAC?
MP3
The MPEG-1/ MPEG-2 Audio Layer III, popularly known as MP3, is a digital audio encoding format, especially designed for the transfer and playback of music. It basically works by compressing the audio data file on the basis of certain predefined rules of encoding.
The main aim here is to reduce the required bandwidth, by significantly reducing the size of the audio file via data compression, while still allowing it to sound like a faithful reproduction of the original to a majority of the listeners. Typically, using the setting of 128 Kbps, an MP3 compression will result in a size reduction of 1/11 of its original uncompressed CD version.
MP3 was designed and developed by a team of engineers from Fraunhofer IIS, University of Hannover, AT&T-Bell Labs, Thomson-Brandt, and CCETT. it has been adopted by the Moving Pictures Experts Group (MPEG) as part of their MPEG-1 standard, and was later extended to the MPEG-2 standard.
Today, MP3 is the most popular audio format in the world. It is widely used for streaming and storage, and is also the default standard of storage and playback in most audio players.
The files compressed using the MP3 compression technology bear the .mp3 extension.

AAC
AAC is the acronym for advanced audio coding. It is a lossy compression standard, which was designed to be the successor of the MP3 format. AAC is touted as being able to maintain better audio quality at the same bit rate when compared to MP3.
AAC was developed with the cooperation of companies including AT&T-Bell Laboratories, Fraunhofer IIS, Dolby Laboratories, Sony Corporation, and Nokia. The Moving Pictures Experts Group (MPEG) officially announced it as a global standard in 1997. It is specified to be a part of their MPEG 2 standard (part 7), and a sub-part of part 3 of the MPEG-4 standard.
Today, AAC is supported by most of the recent media players and audio devices, and is the default audio format for YouTube, iPhone, iPod, iPad, Nintendo DSi, Nintendo 3DS, iTunes, DivX Plus Web Player, and PlayStation 3.
The file extensions included in the AAC format encoding are .m4a, .m4b, .m4p, .m4v, .m4r, .3gp, .mp4, and .aac.

Difference Between AAC and MP3 Format

Now, we shall compare AAC and MP3 on several different counts, and try to find out which one is the better choice.

Sound Quality
The following are the main differences between the AAC and MP3 format as far as sound quality is concerned.

1) AAC has a greater number of sample frequencies (from 8 kHz to 96 kHz) as compared to MP3 (from 16 kHz to 48 kHz). This allows for a more accurate reproduction of the original piece of music, on being decrypted.

2) AAC is capable of storing up to 48 channels of synchronous audio, while MP3 can store only 2. Thus, AAC is ideal for compressing surround sound mixes and other multichannel audio.

3) AAC encoding comprises arbitrary bit rates and variable frame rates. It has a standardized bit-rate, with a bit reservoir facility.

4) AAC has a higher encoding efficiency and simpler filter-bank, since it uses pure MDCT as compared to MP3’s hybrid coding.

5) For stationary signals, AAC, which uses a block-size of 1024 or 940 samples, as opposed to MP3’s 576 samples, manages to achieve a better coding efficiency.

6) Similarly, for transient signals, AAC uses a block-size of 128 samples, as compared to MP3’s 192, which increases the accuracy of coding.

7) AAC generally is much better at handling audio frequencies above 16 kHz. It can also use the Kaiser-Bessel derived window function to get rid of spectral leakage, when the main lobe is widened.

8) AAC can use different methods in different frequency ranges, resulting in a more flexible joint stereo reproduction. It also possesses the ability to incorporate additional tools and modules, such as TNS, Backward Prediction, PNS, etc., to improve compression efficiency.

Size
As far as the actual size of the audio file is concerned, AAC has the advantage over MP3, as it is able to create smaller-sized files while retaining the same audio quality.

MP3 files are compressed by a factor of 10, allowing a 4-minute song that would otherwise take up 40 MB of space to become as small as 4 MB. AAC allows further size reduction by lowering bit-rates, while at the same time keeping the quality from degrading. Typically, a 128 Kbps MP3 song will sound the same as a 96 Kbps AAC song. This is almost a 25% reduction in size as compared to MP3.

Bitrate Comparison
The main advantage that AAC has over MP3 is that files compressed using this technology are able to retain a greater amount of detail, and therefore produce better audio quality as compared to MP3 at similar bit-rates. However, this difference is very subtle, and is only prominent enough to be audible at low frequencies.

For instance, at 256 Kbps, audio encoded in both MP3 as well as AAC will sound the same. The same holds true even when the bit-rate is reduced to 192 Kbps. Only when the bit-rate is 128 Kbps or lower, does the difference starts seeming obvious. At 128 Kbps, audio encoded in the MP3 format sounds muddled as compared to the same one encoded using AAC.

Availability
While AAC and MP3, both find widespread use today, the fact remains that MP3 is the more popular choice of the two. This is largely due to the fact that, at increased bit-rates, the difference between the audio quality of both is negligibly small. Yet, audio purists might still prefer to go for AAC.

The Apple iTunes store is a good option if you are looking for your favorite song in AAC format, while Amazon MP3 can help you find a high quality MP3 file. The following is a small comparison between these two stores.

Amazon MP3 has over 2 million DRM-free songs available for download. In comparison, the Apple iTunes Store has over 6 million songs.

The average price range for songs on Amazon MP3 is between $0.25 to $1.29, while albums range from $4.99 to $17.49, depending on the artist, number of songs, and album type (normal, deluxe, special, etc.). On iTunes too, the pricing is nearly the same, though a few songs and albums are priced a bit higher.

Encoder
The AAC format was designed to overcome the inherent flaws in MP3. Though it is true that, judging by the compression technique alone, AAC clearly can provide better audio quality, it must also be noted that the particular encoder being used also plays a vital role in the process.

Several blind listening tests have shown that even by using the best encoders for each format, AAC’s advantage is only evident for bit-rates below 100 Kbps. Also, not all AAC encoders are able to fully utilize the additional encoding tools that AAC makes available, and thus, the difference between AAC encoded in this manner and an MP3 is hardly noticeable.

Licenses
For streaming or distributing content in the AAC format, no license or payment is required. This is why AAC is the format of choice for online streaming content, such as the Internet radio. Note however that a patent-license is required if you are a manufacturer or developer of AAC format.

For MP3 decoders, Thomson, Fraunhofer IIS, Sisvel and its U.S. subsidiary Audio MPEG, Texas MP3 Technologies, and Alcatel-Lucent, all possess legal control over the patents. These patents and licenses only affect the companies, and the consumers are largely unaffected.

AAC vs. MP3 Verdict: So which one is better, AAC or MP3? Clearly, the answer is quite subjective. While it is true that AAC clearly reigns supreme at low bit-rates, the fact remains that, at commonly used audio bit-rates (160 Kbps or higher), the difference between it and MP3 is hardly noticeable. For an audiophile, this might be reason enough to discard MP3 in favor of AAC, but for most of us regular listeners, MP3 should still be able to provide satisfactory quality, and contribute to an enjoyable listening experience.