What is a Slide Projector?

A slide projector lets you relive your memories in style. It allows you to watch your photographs on a big screen, and makes the experience more enjoyable and entertaining. Read further to know more about this brilliant invention.

You are here: Home / IT Jobs / What is a Slide Projector?

A slide projector lets you relive your memories in style. It allows you to watch your photographs on a big screen, and makes the experience more enjoyable and entertaining. Read further to know more about this brilliant invention.

A slide projector is a device used to view photographic slides. It consists of the following four, main parts:

A flat piece of heat-absorbing glass is put in the light path between the condensing lens and the slide, so that the slide is not damaged. The glass transmits visible wavelengths but it absorbs infrared.

Light passes through the transparent slide and lenses, as a result of which, the visible image is enlarged and projected onto a perpendicular flat screen, and the audience can view its reflection.

The other way of doing it, would be to project the image onto a translucent “rear projection” screen, which is often used for continuous and automatic display for close viewing. This form of projection also helps in preventing the interruption of the audience in the light stream or bumping into the projector.

In the 1950s and 1960s, they were a common form of entertainment. It was a time when family members and friends would gather just to view slide shows of their photographs. Low cost paper prints, digital cameras, DVD media, video display monitors, and digital projectors have replaced the slide projectors to a large extent.

Types of Slide Projectors and their Operating Tips

★ Carousel slide projectors have circular trays, which consist of 20 to 140 slide holders. A stepper motor rotates these trays, and another corresponding system drops each slide in front of the light bulb to be projected. The trays can be horizontal or upright, though horizontal trays are mostly preferred.

★ Dual slide projectors consist of a number of holder trays that are made up of an inner and outer ring. Every ring can be advanced, put in independently, and can also be locked together. Two or more slides can be put in and they can be projected simultaneously.

★ Single slide projectors have only one holder slot that is built into a compact case, which contains the bulb and lenses. These projectors can project only one slide at a time. Each time the slide needs to be removed and loaded manually. 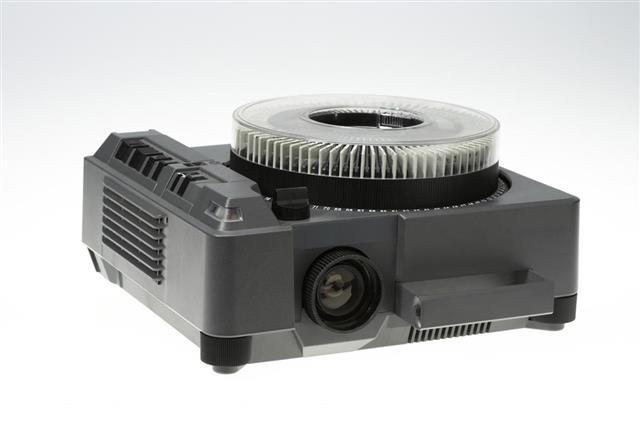 The slides are generally compact and are portable. They are often more in tune with larger slide formats.

★ Viewer slide projectors display slide images on built-in viewing screens. The holders, along with the projection mechanism are contained in a case behind the screen. The screen can be used for previewing images before they are projected onto a bigger screen.

★ Slide cube projectors are so named, since they have cube-shaped holders where slides are stacked in uniformly, one on top of the other. Each slide is put into a circular plate and projected onto a preview screen before it is enlarged. One might include up to 40 cubes, each holding 36 to 44 slides.

★ The other type of projector is the stereo slide projector, which can project two images at a time, and that can be from single holders or separate holders. 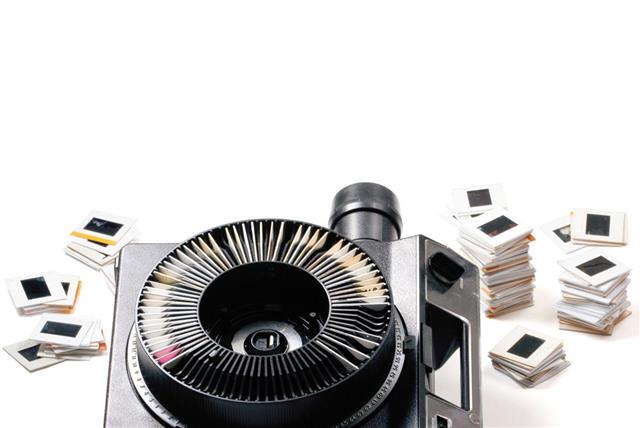 A polarizing lens in front of the slides, helps project every image with a different polarization. Thus, the image that comes up is 3-D, and we get a more detailed picture than a single slide image.

Tips to Buy a Slide Projector

★ Focus: The focusing ring or button allows you to adjust the image and you don’t have to reposition the entire projector. Opt for one that allows you to make adjustments in size, sharpness, color, and contrast.

These simple guidelines should be kept in mind if you decide to go retro and buy a slide projector for yourself.