Types of Data Structures in Computer Science and Their Applications

You are here: Home / IT Jobs / Types of Data Structures in Computer Science and Their Applications 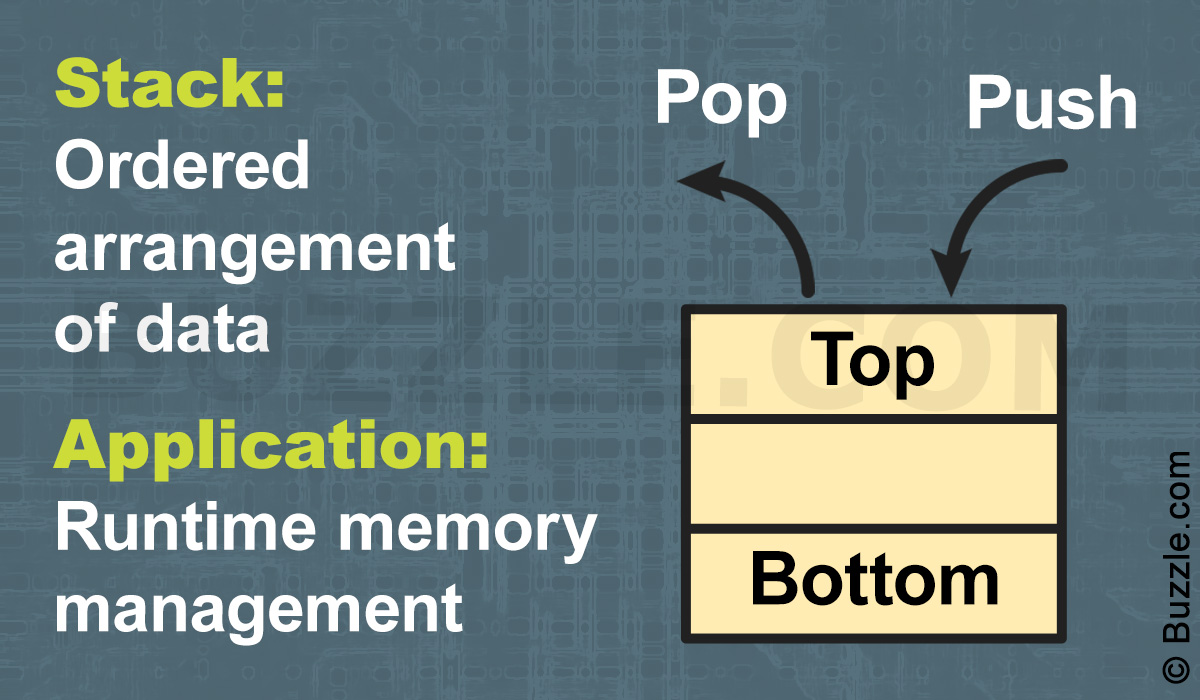 Although both queue and stack perform the same operation of data storage, they vary in terms of their data storage and deletion policies. The stack follows the LIFO (Last In First Out) pattern, which deletes data that has been in it for the shortest duration of time. Whereas, queue follows the FIFO (First In First Out) pattern, which defines the deletion of data that was stored first.

What is a data structure? Data structures are the means of storing data in a very effective manner. Each structure has different ways in which data is inserted, deleted, or queried.

Further, these structures are divided into two main categories depending on data types: primitive and non-primitive. Primitive types refer to the most basic data types used. They are considered as the building blocks for any type of data. The data types that belong to this category are: character, float, long, double, integer, enum, and boolean. Non-primitive types refer to those in which the data is not stored directly, and is referenced using an index. This type further branches into arrays, files, and lists. List structures are linear or non-linear, based on their structure. Given below are the different non-primitive data structures, along with their practical uses.

An array refers to a set of similar elements. It consists of an index. This acts as a pointer to each element of this structure. Unlike most other data storage types, arrays have a fixed length. Its elements are placed in a contiguous fashion. Each of the data item has a fixed memory address. An array can have rows and columns as well. If the value of the index is given for a single record, the values of the other records can be computed with an easy mathematical calculation.

Stack refers to an orderly arrangement of data. It consists of just one end. This end is used for both, data addition as well as removal. It is said to follow the LIFO pattern, which implies that the last data item to enter is the first one to be removed. It is also sometimes termed as the pushdown stack. ‘Push’ and ‘Pop’ are the two functions of this data structure. Push is a function defined for adding data, and Pop is for popping out or deleting the data.

A queue is a list with a linear pattern which has two ends: front and rear. The front end allows deletion of data items from the list. The rear end allows insertion of data items into the list. In case of a queue, the input data doesn’t need to be processed immediately. In fact, the data is processed in a FIFO fashion. It is very efficient for scenarios wherein data is transferred between different processes.

Here, the data sent need not be received at the same rate at which it was sent. A certain system resource is to be shared between different processes.

A linked list is a collection of objects which are linked to each other in a linear pattern. Each of these objects is called a node. The first object is called the front node or the head. Each of the nodes store some data in them. One important feature of this type of list is that the data is not stored in contiguous locations. Every object has two components – one is the data part and the other is the address of the node to which it is pointing. The nodes are not continuous, and can lie in any part of the memory.

Finite set is a mathematical concept, based on which the ‘set’ storage type is implemented. This data structure consists of mathematical functions defining the conditions and elements belonging to it. A variation of this structure is the static set implemented to ensure that no change is done to the data after the structure is constructed. However, the stored data can be accessed by querying the structure.

Another variation is the dynamic set which allows addition or deletion of elements to the set.

A graph consists of a bounded set of nodes (also termed as vertices). A pair of two nodes is called an edge. Each node has some data associated with it. Whereas, the edges indicate the pointers between the nodes. For two nodes ‘a’ and ‘b’, its edge can be represented as (a,b). This type of structure represents the concept of graphs in mathematics.

A tree consists of a set of nodes which are linked via pointers. Each structure has a root node and branches containing the remaining data nodes. In case of an ordered tree, the nodes or objects are ordered in a sequence. In case of an unordered tree, no ordering exists. A tree having no data or nodes is called an empty or null tree.

A file is a collection of multiple records. Each record consists of one or more elements. These elements are called fields. In case of this data structure, every record is assigned a field and a key. This data structure is not the same as an array, because in the former, each record may be of a different data type.

The above types must have been a good overview for those who aren’t aware of what exactly is the role and function of a data structure. They sure are the best means of storing our information.