Thunderbolt Vs. USB 3.0: Which is a Better Interface? 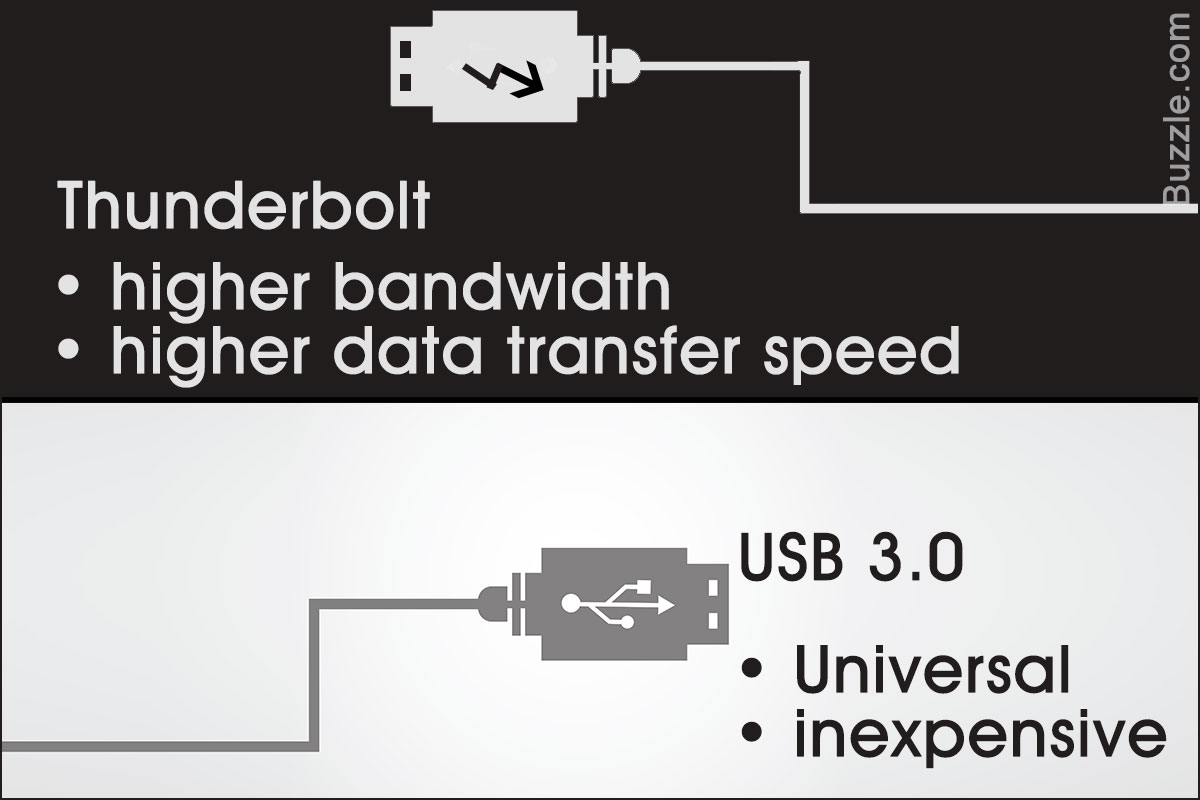 Thunderbolt, the input/output interface found predominantly on Apple desktops and laptop computers, promises unbelievable data and power transfer speed. On the other hand, the latest universal standard, USB 3.0, is a huge improvement on its predecessor, is compatible with past versions, and is widely available. Techspirited tries to conclude which of the two is a better interface.

The Thunderbolt interface was designed to work with fiber optic cables originally, and was in fact earlier called Light Peak. Intel, the developers of this technology, adopted copper wires in its design because it helped to cut costs, and also because using copper wires is advantageous as they have the ability to carry power.

The Universal Serial Bus (USB) interface needs no introduction. Since the days of the first appearance of USB ports and connectors in PCs in 1995, they have come a long way, and today they are ubiquitous. Every computer and laptop comes fitted with a number of USB ports. Devices like USB hubs that allow users to access even more ports, have become widespread. USB ports are even present on unconventional electronic devices like TVs, DVD players, and car stereo systems. In fact, to call this technology “universal” is literally apt, now that all kinds of electronic devices, including mobile phones and cameras also employ the mini or micro USB interface to charge or transfer data.

On the other hand, Thunderbolt is a term whose popularity is largely restricted to circles of Apple-product enthusiasts. Although this technology, which was conceived and developed by Intel, is not as widespread as the USB interface, this fact in no way reflects its ability or performance. In fact, no amount of praise can do justice to Thunderbolt’s unmatched bandwidth and speed capabilities.

With Thunderbolt having such tremendous potential, it may seem surprising that the latest standard, Thunderbolt 2.0, has not fared as well as its competitor, the USB 3.0. Join us, as we compare these two incredible technological innovations on as many grounds as possible, and try to figure which out of Thunderbolt and USB 3.0 is a better interface.

Thunderbolt vs. USB 3.0: The Face-off

USB 3.0
♦ Better known as SuperSpeed USB 3.0, this standard is categorized by increased data transfer speed, no limitation on cable length, improved power management, and both backward as well as forward compatibility with previous standards.

♦ USB 3.0 achieves “SuperSpeed” with the help of an additional parallel data bus. This enhancement not only increases the bandwidth of the system, but it also provides for full-duplex data connectivity (meaning, data can travel in both directions simultaneously). Both these factors contribute to USB 3.0 achieving a data transfer rate much higher than what USB 2.0 offers.

♦ With power efficiency being the highlight, USB 3.0 has the ability to supply one and a half times the power that its predecessors can, and even more (almost double) for optimized devices (like those that use USB ports to charge). Moreover, the ports can switch to a power-saving mode when they are not in use.

♦ In comparison to USB 2.0, this standard is better suited to any application that requires a high throughput, from high-capacity storage drives to video over DVI.

Thunderbolt
♦ Thunderbolt essentially combines PCI Express, a high speed, two-way serial data connection standard, and DisplayPort, which is used to connect to a display device (a technology much like HDMI, except it is royalty-free, and compatible with VGA and similar older video formats) into a single port/connector system.

♦ This means it supports high-speed data transfer between devices, has the ability to function as an Ethernet link (with an adapter, of course), supports hot-plugging (the ability to connect and disconnect hardware without rebooting the system), and can also be used to connect display devices like monitors, including those with the 4K HD resolution.

♦ Because of the high bandwidth it offers, a single port can be used to connect up to six high-speed compatible hardware devices, with none of them suffering loss of throughput.

♦ Over and above all of this, it has the capability to supply up to 10 watts of power.

Winner: In terms of features and specifications, both USB 3.0 and Thunderbolt seem very promising, and we have no option but to call it a tie.

**Note: The speeds mentioned in this section are theoretical or maximum values. Actual data transfer rates available could be much less.

♦ This ability makes it ideal for applications in scenarios where a higher throughput is required, including RAID array storage devices, which is something that was previously not even imaginable.

♦ What’s more, unlike in USB 3.0, where data transfer is limited to just one channel, Thunderbolt has four independent channels, meaning if more than one device is docked at, or daisy chained from a Thunderbolt port, each of them will be offered the 10 GB/sec maximum data transfer rate.

♦ The already-released (and available in a number of recent Mac/MacBook devices) Thunderbolt 2 is a technology that has the ability to offer a maximum speed of 20 GB/sec, four times as fast as the USB 3.0, and four times as fast as the impending USB 3.1. This phenomenal speed is achieved by combining two bidirectional lanes of data transfer having the same bandwidth as a single channel in Thunderbolt, into a single channel with double the bandwidth.

Winner: We were left with no doubt about who is superior in this respect; Thunderbolt is the obvious winner in terms of speed.

**Note: The prices mentioned in this section are relative and subject to change.

USB 3.0
♦ The biggest factor backing USB 3.0’s popularity is its low cost. As good as free, USB ports are already fitted on every Intel and AMD chipset by the manufacturer.

♦ Being a universal standard, almost every device comes with the USB-connect option, and therefore, cables of all varieties, including those with mini and micro USB connectors are readily available at budget prices.

Thunderbolt
♦ The cost to include a single Thunderbolt port in any circuit board itself costs upwards of USD 60.

♦ Computers that come with Thunderbolt ports are quite expensive. Most of the recently-released Apple desktop devices, which are equipped with these ports, fall within the price range of USD 1,000 – USD 4,000.

♦ To actually make use of these Thunderbolt ports, one has to purchase compatible peripheral devices in addition to the computer itself. And they do not come cheap. A 27-inch Apple Thunderbolt display, for example, costs USD 999.

♦ What’s a port without cables, connectors, and adapters? When a 2-meter cable costs one USD 39, and a Gigabit Ethernet adapter costs USD 29, it becomes evident that investing in Thunderbolt will prove to be a very costly affair.

Winner: Backed by its universality that is almost impossible to replicate, the USB 3.0 is the obvious winner when cost is the deciding factor.

USB 3.0
♦ USB 3.0 and its predecessor, USB 2.0, have completely compatible interfaces. This means that in case of a mismatch between port and cable standard, data/power transfer takes place in accordance with the lower standard.

♦ In general, the USB interface is present on almost every electronic device that exists today. Additionally, USB 3.0 has extended the applicability of the USB interface by a large amount. Thanks to its design that betters its power efficiency, the USB platform can now be used to connect high-power devices like display monitors, and in areas that require high data transfer rates, like video and audio interfaces, and Blu-Ray burning.

Thunderbolt
♦ Thunderbolt and Thunderbolt 2 are compatible with each other in a similar manner that USB 3.0 is compatible with all its previous versions. The cables for either generation of Thunderbolt are also interchangeable. The host computer, the interface, and the peripheral device (and all devices in the daisy chain) need to support Thunderbolt 2.0, if this speed is to be achieved.

♦ Because it is not as widespread, Thunderbolt is limited to computers and peripheral devices that support this protocol. To connect other display monitors supporting other standards like VGA, DVI, HDMI, and so on, to a Thunderbolt port, a Thunderbolt-to-respective-format adapter is required.

♦ The appropriate adapter is not always easy to locate, not to mention quite expensive, and backward-translation (meaning, say you want to connect your Xbox or PlayStation 3 to an Apple Thunderbolt 4K Monitor) would need a completely different adapter manufactured by third-party companies.

Winner: Owing to its unmatched ubiquity, USB 3.0 wins hands down with regard to interface compatibility.

Before publishing our verdict, we would like to highlight the facts.

Thunderbolt, in terms of speed, technology, design, and published results of endurance tests, is a far superior, and veritably futuristic data input/output standard that truly deserves the title of “Best Interface”. It is so ahead of its time that many “compatible” devices available today are not even capable of taking advantage of Thunderbolt and Thunderbolt 2.0 to their full capacity. However, in terms of its outreach, Thunderbolt falls short. Apart from specific Thunderbolt peripherals, one can only use the Thunderbolt port to connect to devices of a limited number of alternate interface standards, even when adapters are used. Maybe this, and of course, the cost factor, are interlinked, and that is why Thunderbolt has only limited applications although its potential is massive.

The USB interface, on the other hand, is all around us. Although USB 3.0 cannot match Thunderbolt’s speed, the data rate it offers is a very notable improvement over the previously prevalent standard, which in fact is what the world had to make do with for almost a decade! A universal standard having Super-speed is already a dream come true, not to mention its cross compatibility with a number of other interface standards through adapters, and hence, consumers are not in a hurry to switch to an input/output standard with limitations, even if it can perform better.

We believe that in spite of the fact that the maximum data rate that USB 3.0 offers is not a grand figure, it is sufficient to increase the range of its applications to a large extent, and with added perks like power-saving, and of course its popularity, USB 3.0 is the better interface of the two currently. As far as Thunderbolt is concerned, only time will tell if it is a worthy investment.

We hope you enjoyed the one-on-one between the world’s biggest inter-device communication interfaces of the day, and that you were able to decide which one is most suited for you.