Differences and Similarities Between Grid and Cluster Computing

Grid and cluster computing are the two paradigms that leverage the power of the network to solve complex computing problems. But they are implemented in different ways. Techspirited explains these concepts and points out the similarities and differences between them.

You are here: Home / IT Jobs / Differences and Similarities Between Grid and Cluster Computing 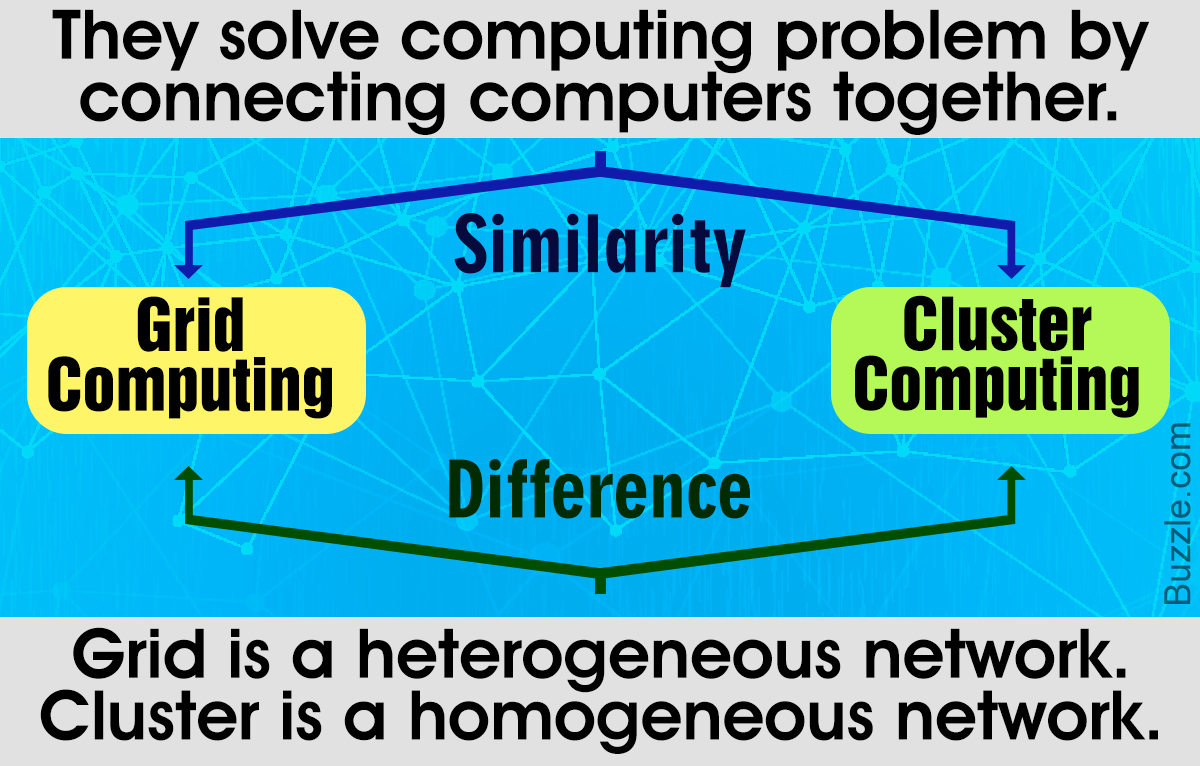 Grid and cluster computing are the two paradigms that leverage the power of the network to solve complex computing problems. But they are implemented in different ways. Techspirited explains these concepts and points out the similarities and differences between them.

“The next big thing will be grid computing.”
― John Patrick, Vice President for Internet Strategies, IBM

When we want to solve a computing problem that requires resources more than one computer can handle, we need to connect it with other computers and get the job done. Also, we do not come across such problems always. We need a dynamic way to connect the computers only when required. This helps us to achieve optimum utilization of resources. Grid and cluster computing are two such methods that help us to nail down mammoth computing tasks by connecting computers together. In this article, we delve on the differences and similarities between these two strategies.

What is Grid Computing?

Grid computing is that technology in which we utilize the resources of many computers in a network towards solving a single computing problem at the same time, i.e., in parallel.

How it is done

Thousands of computers are employed in the process. All the devices that have computing power like desktops, laptops, tablets, mobiles, supercomputers, mainframes, servers, and meteorological sensors are connected together to form a single network. They are all connected together using the Internet. A software that is capable of dividing the program over many computers is used for this purpose. This entire infrastructure of connected computers is called a grid.

When we are solving a problem that requires a lot of CPU processing or access to a huge repository of data, we use grid computing. If you want to solve a computing problem, you just have to log in to the Internet, and you can avail all the computing power you need to solve it. You don’t have to worry from which part of the world it comes from. Just know that the required power and storage capacity is there, awaiting your perusal. Although the grid connects several different platforms, it can be accessed from a single web browser. The problem that needs to be solved is not within the capacity of a single computer. Hence, we harness the idle capacity of other computers and solve it.

SETI (Search for Extraterrestrial Intelligence) @Home is a popular grid computing project. In this project, PC users from all over the world voluntarily give their idle CPU cycles and thus collaborate in analyzing signals coming from the outer space so that we can get evidence of extraterrestrial life (aliens). The grid so formed performs an important task and also saves money and utilizes optimum resources.

What is Cluster Computing?

In cluster computing, we connect a group of 2 or more computers in such a way that they work in combination as one computing unit towards solving a common computing problem.

How it is done

This approach is useful in parallel processing, load balancing, and fault tolerance.

Oracle Parallel Server is an example of a database cluster. Beowulf is another high-performance cluster.