Log in to Facebook and you will find a constant stream of status message updates with people telling their friends what they are feeling or just making them laugh with their sense of humor. Here is a list of status messages we found thoroughly entertaining. 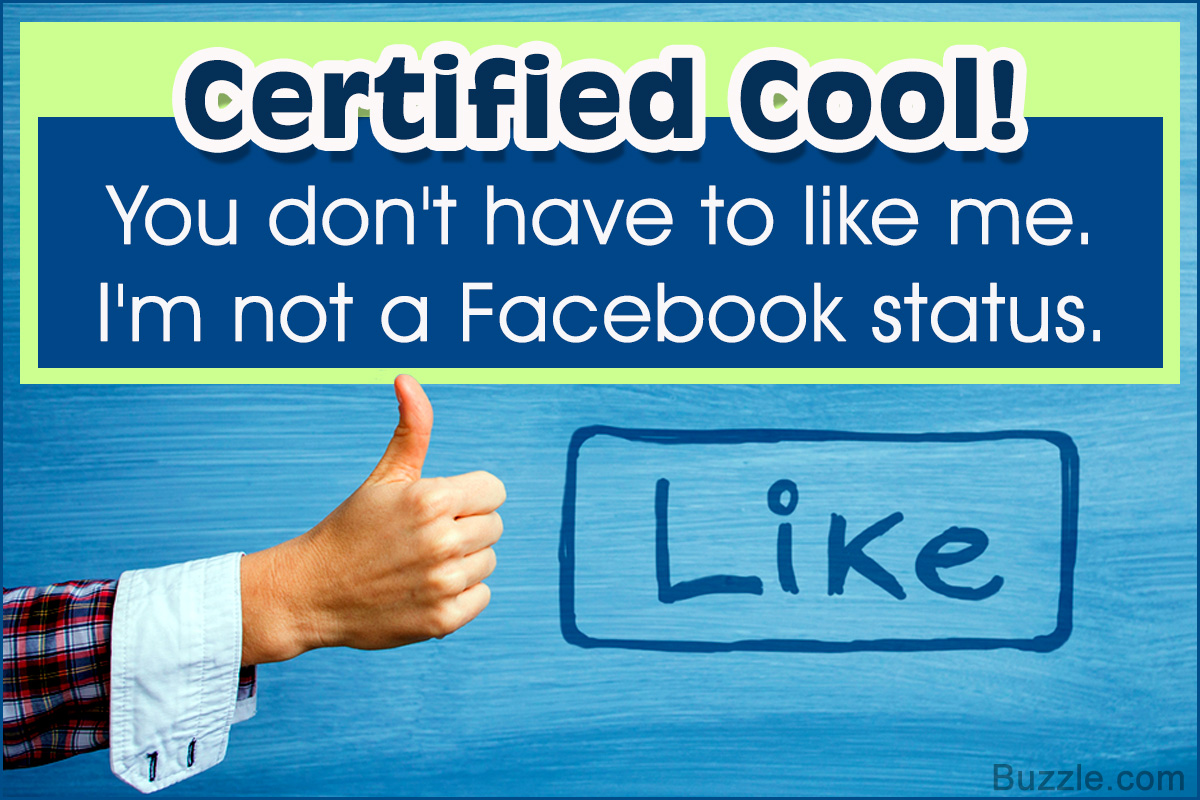 Log in to Facebook and you will find a constant stream of status message updates with people telling their friends what they are feeling or just making them laugh with their sense of humor. Here is a list of status messages we found thoroughly entertaining.

One of my friends on Facebook recently updated his status to read, … has nothing cool or smart to say. While I was bewildered as to why someone would need to declare their lack of wit at the present moment to the world at large, obviously, I do not understand the world of social networking very well. His status update had thirteen people commenting on it in the next fifteen minutes, with reactions ranging from questions to solutions.

Updating their profile pages with cool and funny Facebook statuses, guaranteed to garner attention and reaction, is a great technique. These funny status messages entertain and amuse. So here is a list of unique status updates for those who live half their lives in the virtual planet of social networking.

Status updates started out as a way to let your friends know what you were feeling on that particular moment or what was happening in your life. Today Facebook has become more about getting the most number of comments on your status and ensuring that you are arousing someone’s interest by putting up a funny status. Quite an effective way for the attention seekers amongst us (and who does not like attention?), status messages and updates need careful thinking. They cannot seem like they have just been copied from a friend’s profile and passed off as your own. They need to be witty, funny, and should pique the other person’s interest levels. Here are some funny updates that caught our eye.

» ʎɐqǝ uo pɹɐoqʎǝʞ ɐ ʎnq ı ǝɯıʇ ʇsɐן ǝɥʇ sı sıɥʇ
» Scratch here to reveal today’s status. ▒▒▒▒▒▒▒▒▒▒▒▒▒▒
» What do I do when I see someone EXTREMELY GORGEOUS? I stare, I smile and when I get tired, I put the mirror down!
» ¡ǝɯıʇ ǝɯɐs ǝɥʇ ʇɐ ʞooqǝɔɐɟ ǝsn puɐ puɐʇspuɐɥ ɐ op ʎןןɐuıɟ uɐɔ
» is proud of herself. She finished a jigsaw puzzle in 6 months and the box said 2-4 years.
» doesn’t suffer from insanity … he enjoys every minute of it.

» is wondering where Noah kept woodpeckers on his ark.
» feels like getting some work done … and is sitting down until the feeling passes.
» is color blind and trying to solve a Rubik’s cube. This could take a while …
» dreams of a better world; where chickens can cross the road without having their motives questioned.

» Good morning! I see the assassins have failed.
» Be nice to nerds, chances are you will be working for them.
» would rather check her Facebook than face her checkbook.
» is writing this to entertain the losers who take the time to actually read what others’ status is
» The winner of the rat race is still a rat.

» Teenagers drink twice as much as they did 10 years ago. Mind you, they were only aged between 3 and 9, ten years ago.
» Most of us can keep a secret. It’s the people we share it with who can’t.
» believes that if you tell your boss what you really think of him, the truth will set you free.
» thinks that whoever says paper beats rock is an idiot. Next time I hear someone say that I will throw a rock at them while they hold up a sheet of paper
» My favorite mythical creature: The Honest Politician.

» The day when YouTube, Facebook, and Twitter combine, they will form YouTwitFace.
» Why must the phrase, It is none of my business, always be followed by, but?
» is out making some changes in his or her life…leave a message and I’ll get back to you. If I don’t return your message, you are one of the changes!
» is normal. It’s everyone else that’s weird.
» is proof that God has a sense of humor …

» is rejecting your reality and substituting it with his own.
» is joining the army. He hears it’s a great way to meet people. Then kill them.
» is tired of chasing his dreams. He’s just going to ask where they are going and hook up with them later.
» is getting a grip on reality and choking it to death.
» I have to take my paycheck to the bank. It’s too little to go by itself.