I think computer viruses should count as life. I think it says something about human nature that the only form of life we have created so far is purely destructive. We've created life in our own image. ~ Stephen Hawking.
I think this quote justifies the drastic effects of different viruses on PCs and laptops. This may sound strange, but I think that these viruses and worms have positive and negative effects on technology and human life. On one side, it has devastating effects, disrupts productivity, and causes loss of billions of dollars. On the other hand, viruses show how smart and interconnected human beings have become.
Computer viruses are almost similar to biological viruses and worms, they multiply and for survival they need a host. The common factor, in both scenarios is a weak link; in humans, a weak immune system and in computers, a vulnerable system. Let's have a simple answer to the question what is a computer virus? According to Websters dictionary, a computer virus is defined as a program which is usually hidden with another innocent program which duplicates itself, inserts itself into other programs and files, and later performs hazardous functions to destroy data. Always remember that these viruses are not natural, they are created and spread to healthy computers to infect them.
Famous Computer Viruses
By famous we mean the ones that have affected millions of machines leading to huge social and economical damages. Throughout history you will come across a huge list of computer viruses and worms created by man, but the names mentioned here are the most dangerous ones.
I LOVE YOU
I think everyone who has owned a computer has heard about this dreaded virus. I LOVE YOU is believed to be one of the most dangerous viruses. It was developed by VBScript and was discovered on 4th May 2000 in Philippines. In just 24 hours it had affected PCs in every country, leading to a loss of USD 5.5 billion. Everything starts from an email which arrives in the user's inbox with I LOVE YOU as the subject. After entering the system, the virus attaches a copy of itself on each file of the computer. In addition to this, it sends a copy of itself to all the users who would be on the victim's contact list.
Conficker
Ranking at #5 in the list of most dangerous computer viruses, Conficker was born in November 2009 and it affected more than 5 million PCs in a short span of time. It is credited for creating a secure worldwide infrastructure for cyber crime. This worm duplicates itself and spreads via a buffer overflow, a weakness in the server of machines using Windows OS. After entering the machine, it affects services like Windows Update, Windows Defender, Windows Security Center, and Windows Error Report. Today having the best antivirus you can is a good option, as it is able to destroy this worm which had created hell in countries like India, China, and Brazil.
Sasser
This nasty worm ruined almost everything that came in its path and was the talk of the Internet for many months. This computer virus spread by penetrating into a vulnerable network. It created havoc wherever it went, from the British Coast Guard to Delta Airlines, which had to cancel some of its flights after its systems were infected by Sasser.
Asporex Botnet
Asporex Botnet is the reason for many phishing scams. Discovered in 2008, the Asporex Botnet has been used to launch many high profile attacks on different websites to spread malware. The Botnet makes itself ready in a very unusual way and infects mostly those websites which are running Active Server Pages. The Botnet always attacks in waves and each wave is designed to infect as many websites as possible.
List of Computer Viruses and Worms
These viruses and worms are always part of the news, damaging systems and causing malfunctioning in networks are one of the many problems that a virus or worm causes in a PC or a laptop.
The best way to make your computer safe from different types of viruses is to install the best antivirus program and keep updating it regularly.
Share This 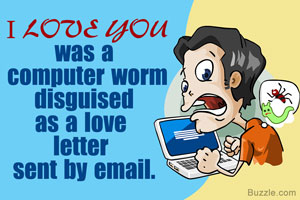 History and Effects of the 'ILOVEYOU' Virus

How to Remove the Conduit Search Virus