Are Cyborgs Limited Only to Fictional Movies? Let’s Find Out 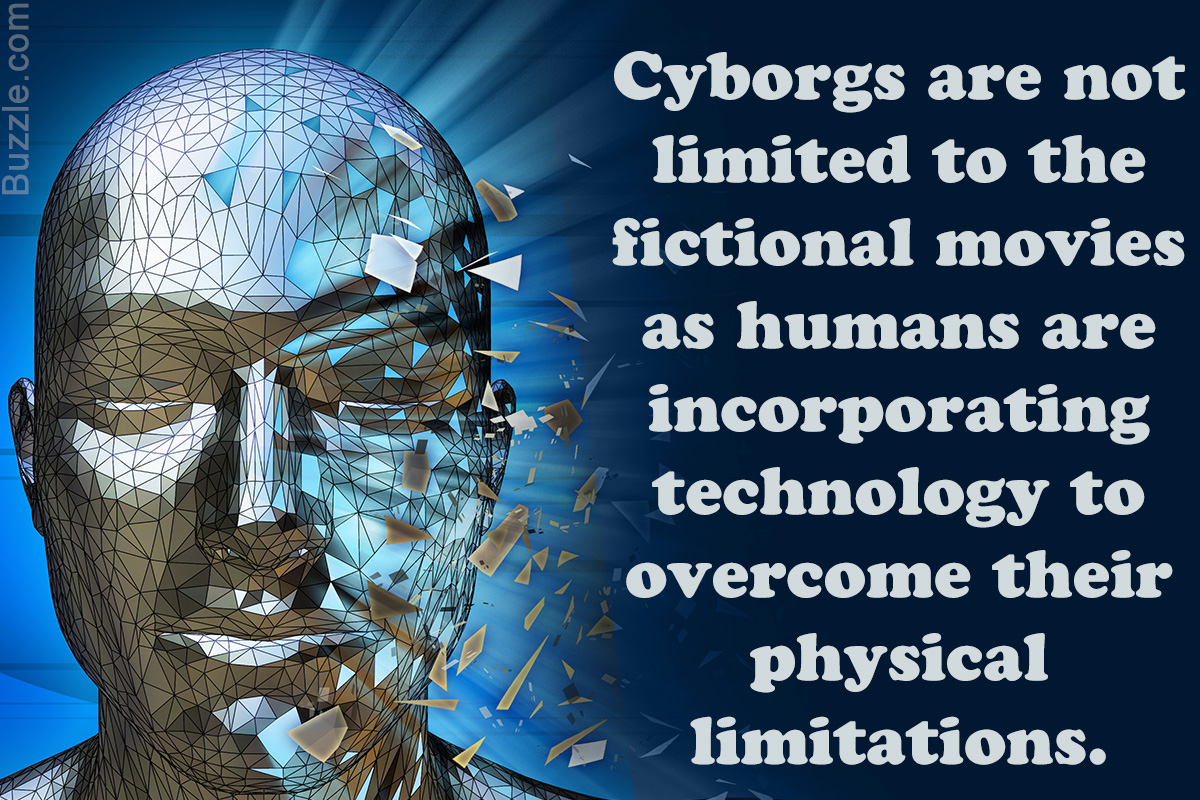 With advancements in robotic engineering, will there be a day when we see cyborgs in real life too? Well, though not it the literal sense, man has started using cybernetic parts to enhance his abilities. This post explores the possible ethical issues that may concern cyborgs.

Cyborg is a portmanteau of the words ‘Cybernetic’ and ‘Organism’, which implies an organism that uses cybernetic parts.

Can you imagine life without modern equipment such as computers, smartphones, and other technological devices? I’m sure, we cannot relate to such kind of a life. We all are dependent on technology. A power failure will shut our offices and hamper our work.

However, what if humans go a step further, incorporating these devices in their own bodies? In other words, can the ‘cyborgs’, as seen in fictional movies, exist in real life too?

With rapid development in technology, cyborgs are not limited to fictional movies only as humans are incorporating technology to overcome their physical handicap or limitations. In the modern sense, the word ‘cyborg’ is also used to refer to ‘a person who uses technology to magnify, or raise any of his normal abilities, by embedding it in his body’.

Advance research in the field of robotics has led many doctors and scientists to explore the possibility of using technology to improve the performance or abilities of the human body. While some of them have been successful in helping those with disabilities, only time can tell whether cyborgs which we see in fictional movies will exist in real life too.

Let’s first explore the meaning of cyborg, how it is referred to in modern-day life, and examples of such people who are considered to be akin to cyborgs.

What is a Cyborg?

Cyborgs are actually referred to as fictional characters that are half human and half machine. They were a part of science-fiction novels and movies. RoboCop, The Terminators, etc., are examples of cyborgs. However, in the modern context, cyborgs may be referred to as humans who have cybernetic parts embedded in their bodies.

While in the real world, technology has not progressed enough to produce ‘RoboCops’, or superhumans equipped with hi-tech powers, it can be definitely said, that there are some who have dared to push the limits of science, to either overcome their limitations, or gain some additional abilities.

Following are examples of those who have dared to use technology to their advantage, by making it a part of their body. Of course, you won’t see them flying, or shooting through their eyes like superhero cyborgs, yet, they’ve managed to come close to being considered a cyborg.

The Unique Case of Neil Harbisson: Artist Who Listens to Colors, and Visualizes Music.

✦ Known worldwide as the ‘cyborg artist’, and also the first human to have his identification photograph on the passport with his electronic device sticking out of his head, Neil Harbisson is certainly a unique case.

✦ Neil was born with extreme color-blindness, and could see in visions of gray-scale. However, he now has an antenna sticking out from his skull, that makes him look like a cyborg from the movies.

This apparatus is referred to as the ‘eyeborg’. He uses the eyeborg to perceive colors: the antenna sticking out of his head, receives light frequencies of colors, and then transfers them to the chip installed at the back of his head, which converts them into sound frequencies.

✦ Neil went to the extent of forcing the UK government officials to accept the ‘eyeborg’ as a ‘part of him’. He convinced the British Passport Authority, and won the right to display his ‘eyeborg’ on his passport picture. According to Harbisson, the ‘eyeborg’ is part of him and not simply a technological invention.

✦ The impact of the technology? Now, he can hear colors, and see ‘sounds’. He is the founder of ‘Cyborg Foundation’, which encourages people from around the world who wish to become cyborgs, promotes the use of cybernetic parts, and also fights for the protection of their rights.

✦ On the other hand, Neil’s partner in the ‘Cyborg Foundation’, Moon Ribas, a choreographer, can sense the vibrations in her body, whenever there is an earthquake about to occur, through a chip embedded in her elbow. That way, she states, that she feels more connected to the earth.

✦ Jesse Sullivan: After being electrocuted, he had to amputate both his arms. Today, he uses bionic limbs that were developed by the ‘Rehabilitation Institute of Chicago’.

✦ Professor Kevin Warwick uses his body to conduct experiments on converting the human body to a cyborg. He has installed a microchip in his body, which enables computers to recognize him and even greet him.

Advantages and Disadvantages of Being a Cyborg

✦ Of course, the advantage of having cybernetic parts, is not only overcoming handicaps, but helping those living in disaster prone areas (currently, scientists are working on cyborg cockroaches that aid in finding survivors of earthquakes), and improving our efficiency, or perhaps even help in our daily mundane chores, which we indeed find frustrating.

✦ Learning and memorizing will become very easy. We might have unlimited access to information, without using the Internet. (Imagine having a Google search in your brain!).

✦ Furthermore, won’t it be wonderful if these gadgets could boost our energy and automatically encourage and motivate us?

✦ Imagine someone hacking your brains? Won’t that freak you out? What if you are also subject to programmable virus infections, and someone hacks into your thoughts and modifies them? Well, it is certainly a scary concept, and thankfully, currently, we have nothing to worry about this.

✦ But what about our cybernetic organs? Should they be replaced after a fixed time, or simply have to update it for the latest upgrades? Can they serve as a substitute for our healthy organs made of flesh and blood? Will mutilating our bodies, and trading our organs for wires and gadgets be considered against the rules of nature?

Moreover, humans cannot be devoid of emotions. But what if these gadgets alter or interfere with our emotions? Well, that would be a big disaster.

✦ What if countries use cyborgs to become powerful, and overpower each other? What if a bunch of rich people use technology to oppress the poor even more? There are many more questions to answer.

Ethical Issues: Bargaining Our Flesh For Technology? How Far Are We Taking This?

✦ When humans try to play God, there are lot of ethical issues that will crop up. Definitely, how we make use of a new technological invention determines its future. Is incorporating such mechanical devices in our bodies, to outsmart other humans, beneficial for society? Man’s ‘natural thirst for power’, cannot certainly determine the future of cyborgs.

If they’re used for selfish purposes, there is a high possibility that a single country might try to colonize and rule the rest of the world, denying freedom, the basic right of every human.

✦ Nevertheless, is it ethical to use technology to surpass the limitations given to us by nature? To each his own. On the other hand, if you look at the good side, technology can help a person with disabilities, perhaps even act as a substitute for any body part and certainly help that person carry on in life smoothly like any normal person.

✦ Man is a curious animal. He is always on the lookout of something new. We all want to known about the planets besides ours, whether life exists on them, existence of any aliens, etc. Perhaps, in the near future, we might all turn into cyborgs to overcome natural limitations and explore what is unknown right now.

Well, about the future, time will decide the fate of mankind. Are we becoming overdependent on technology? As we type using a machine, the question arises whether in a futuristic world, will there be a machine that will be able to read our thoughts, and immediately write them down!

However, there might come a time when cyborgs and robots develop emotions, and humans cease to have them, becoming machines in the process and, losing a precious jewel that nature has bestowed us with.

To answer the question, we can say that yes, cyborgs are no longer limited to fictional movies. There is a high possibility that, in future, there might be high-tech gadgets embedded in human bodies, that would give extra abilities to human beings. Today, it can be said that the path to development of cyborgs in real life has already begun.